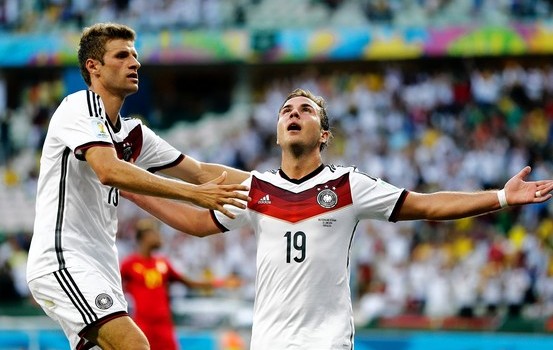 FOR THE U. S., GERMANY IS A WORLD CUP LITMUS TEST

Millions of Americans have been mesmerized by the U. S. team’s first two games in the World Cup — the victory over Ghana and the oh-so-close-to-victory tie with Portugal.

However, the next opponent is Germany, which was a 4-1 favorite to win the Cup — after Argentina and Brazil — while the U. S. has improved its chances from 100-1 at the start to 66-1 as of Wednesday morning.

In other words, for the U. S. the rubber will hit the road tomorrow at noon.

“The expectations are simple: They’ve always got to win it,” U.S. head coach and former German superstar Jurgen Klinsmann said Tuesday before training. “They live with that; they get along with that, so they can embrace those expectations within the inner circle as well. And that’s how they prepare and start the tournament, and go from game to game.

“So their consistency is really something that they’re really known for. Obviously their spirit is always going into the last second of the game, to turn things around, fighting until the last moment.”

There is consistency in sports and then there is Die Mannschaft, as the team is known.

Since West Germany was allowed back in the World Cup in 1954, it has never failed to advance out of group play. The Germans has won at least two games in every World Cup group stage since 1990. They haven’t lost the third game of the group stage since 1986, the last time they failed to get at least two wins in the first round. They have won every third game since 1994. Their three World Cup trophies—in 1954, 1974 and 1990—rank third behind Brazil’s five and Italy’s four.

History aside, Germany will bring to Thursday’s match in Recife the tournament’s deepest team. Ahead of the 2006 World Cup, Klinsmann took over Germany’s national team and turned it from an always organized defensive-minded squad to a machine based on youth, speed and attacking the goal. Midfielder Jermaine Jones and defender Fabian Johnson, German-Americans who have been arguably the U.S. team’s best players, couldn’t make it.

The shift made Klinsmann a legend in Germany, even more than his storied career on the field. Now with Philipp Lahm anchoring the defense, Bastian Schweinsteiger (the best name in sports to scream) commanding the middle of the field, Sami Khedira and Mesut Ozil driving the attack, and Thomas Muller and Mario Götze finishing it, there isn’t even room in the starting lineup for the team’s all-time leading World Cup goal scorer, Miroslav Klose. He came off the bench Saturday against Ghana to score the equalizer and tied a record for most goals in the World Cup at 15. The Brazilian Ronaldo held the record on his own previously.

There are no weak spots, and no possibility of grinding the team to a halt by shutting down a single star.

“They have a crazy bench,” Jones said. “It’s not like Portugal, where it’s always about one player. They are more like a team.”

The 1974 World Cup final was supposed to be the coronation of a Dutch side nicknamed Clockwork Orange that created modern soccer, the ultrafast, constant-motion style known as Total Football, where every player can play every position. Germany won, 2-1.

The Germans knocked out Spain in 1982, host Mexico in 1986 and host South Korea in 2002. England still suffers from post-traumatic stress from its semifinal loss to the Germans on penalties in the 1990 semifinal.

In other words, this isn’t a team—or a soccer nation—prone to doing anyone any favors, even though both the U.S. and Germany will advance to the knockout round with a draw. The main story in the German daily Bild on Tuesday focused on the “disgrace of Gijon,” a reference to a 1982 match between West Germany and Austria that the Germans won 1-0, a score that allowed both teams to advance. Once Germany scored, the two teams held a kick-around and ran out the clock.

“It’s about business,” said Oliver Bierhoff, Germany’s general manager and a close friend of Klinsmann’s. He said talk of an agreement for a gentlemen’s draw has been so publicized that it would never be allowed. “We know Jurgen, we know that the Americans play with a positive spirit, very athletic, very fair. We think in the same way.”

The Americans don’t just play like Germans. To a large extent, they are German. In addition to Jones and Johnson, three other U.S. team members are German-Americans who grew up in Germany: defenders Tim Chandler and John Brooks and midfielder Julian Green. All have spent most of their careers in the Germany and have an intimate knowledge of their opponents. “There aren’t any secrets,” said U.S. midfielder Graham Zusi.

All of them face going against their home nation in what likely will be one of the strangest matches of their careers, especially for Klinsmann.

“Their team is ready to take it to the end of the tournament, and they have enough potential to win this World Cup,” Klinsmann said of the Germans. “I will give them big hugs before the game and then leave to the side. We are going to get the job done and we’re going give a farewell hug again after the game.”