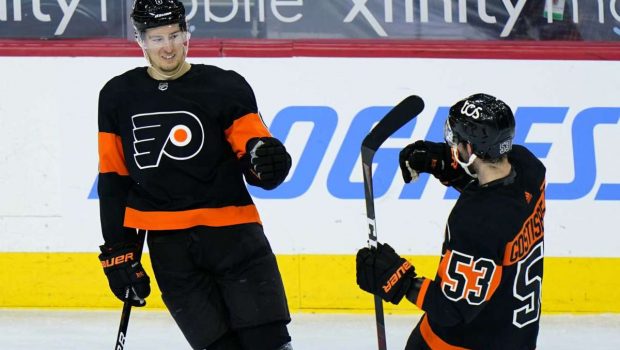 FOR THE FIRST TIME IN MONTHS, FLYERS RESEMBLE AN NHL TEAM!

Claude Giroux and Kevin Hayes jump-started the dead for all intents Flyers offense gave and a 7-2 victory over the first-place Pittsburgh Penguins.

Joel Farabee had a goal and two assists and Shayne Gostisbehere, Wade Allison and Robert Hagg also scored for the Flyers, who snapped a three-game skid and won for just the sixth time in the last 16.

“I think it happens to every team that sometimes you just don’t have the legs, and I think we were just faster and fresher than them,” said Jakub Voracek, who had three assists.

Sidney Crosby and Jason Zucker scored for the Penguins, who are tied atop the East Division with Washington. Each has 71 points, but the Capitals have four games left while Pittsburgh has three.

Evgeni Malkin returned to the lineup for Pittsburgh after missing 23 games with a lower body injury. The Penguins didn’t miss a beat without the four-time All-Star, winning 16 of the contests during his absence. Malkin had an assist on Crosby’s tally.

Alex Lyon made 35 saves for his first victory in his fourth start.

The Flyers were thought to be a Stanley Cup contender at the season’s outset, and that didn’t change after starting the season with a convincing two-game home sweep of the Penguins. But Philadelphia (23-22-7, 53 points) has been in a free fall since the end of February, was eliminated from the playoffs last Thursday and are just trying to stay about .500 with four games remaining.

The Flyers probably wish they had more games against the Penguins, though. Philadelphia improved to 5-2 against Pittsburgh with one of its best performances of the season.

Asked about his club’s performance against the Penguins compared to the rest of the East, Vigneault said, “You don’t want to ruin my win, do you? Sort of happy right now. Let’s celebrate the win and we’ll talk about that later.”

The Flyers jumped out to a 3-0 first-period lead for the first time this season.

Hayes’ tally 5:58 into the contest to give Philadelphia a rare early advantage. The goal wasn’t whistled on the ice as it looked like Casey DeSmith made a remarkable glove save on Hayes’ wraparound shot, but replays showed that DeSmith’s glove actually was over the goal line and was awarded after an officials’ review.

It was the first time in 11 games and just the second time in the last 22 contests that Philadelphia scored first.

“I thought we played with the puck for most of the night, and we weren’t chasing the game,” said Philadelphia’s Scott Laughton, who had an assist.

Gostisbehere’s slap shot from the point through traffic on the power play made it 2-0 with just under 5:52 left in the period. And Giroux notched his 15th 1:04 later. Sean Couturier sent the puck behind the net, Konecny tipped it to the slot and Giroux fired it past DeSmith’s glove.

Crosby netted his 21st of the season and 47th in 76 career games against the Flyers 2:30 into the third when he tipped Kris Letang’s pass over Lyon’s left shoulder from the side of the net. Zucker pulled Pittsburgh within 4-2 with 11:36 remaining when he tipped John Marino’s shot past Lyon for another power play goal, but Farabee dashed any hopes of a Pittsburgh comeback with his team-leading 17th goal with 8:23 left.

2 thoughts on “FOR THE FIRST TIME IN MONTHS, FLYERS RESEMBLE AN NHL TEAM!”