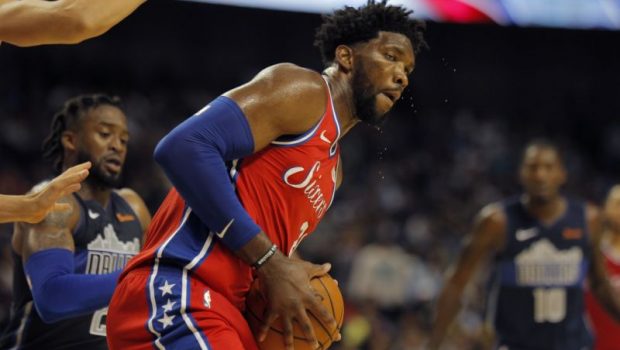 FOR SIXERS’ PURSUIT OF AN NBA TITLE, THE FUTURE IS NOW!

Joel Embiid Sixers center broke through last season, averaging 22.9 points, 11 rebounds, 3.2 assists, and 1.8 blocks in 63 games. (He would have appeared in more outings if not for a freak collision between his face and Markelle Fultz’s shoulder late in the regular season.)

Embiid spent much of the offseason working out with NBA players (including Jayson Tatum, Jordan Clarkson, Mo Bamba, and Meyers Leonard, among others) in Los Angeles in an attempt to improve his conditioning and polish his game.

That Embiid dedicated a good portion of his summer to those pursuits bodes well for the Sixers, who obviously have high hopes for the season after winning 50-plus games for the second time since the turn of the century; head coach Brett Brown recently told his team and anyone else who would listen that the Sixers expect to reach the NBA Finals this season.

For that to happen, Ben Simmons will also need to improve.

Like Embiid, the Rookie of the Year spent the summer trying to sand down the rough spots of his game. Simmons was a triple-double threat in his first season, but his shot was also somewhere between suspect and nonexistent.

Simmons took 46 percent of his shots in the restricted area and avoided the 3-point line in historic fashion. He was also a liability at the line, where he shot just 56 percent on 4.2 attempts per game. If he can improve any or all of those areas, he’ll go from someone who is already very good to being among the league’s elite. And he knows it. Simmons told the team’s official website that working on his jump shot and free throw form will cause teams to “give him a little more respect” in terms of how they play him defensively. That, he reasoned, is “how you become great.”

The Sixers would probably settle for something south of great as it pertains to Fultz. Good or even regularly available would be a solid start for the point guard. At media day, Fultz said he has his “swagger back” after spending the summer working on his jumper—a shot his personal trainer insisted had been overhauled and fixed. If that’s the case, Fultz would be the perfect fit for what the Sixers need: a guard who can play on or off the ball, distribute, and—in a perfect scenario—stretch the floor with a (semi)reliable jump shot. If that Fultz shows up, give him all the pre-workout treats he wants as a reward.