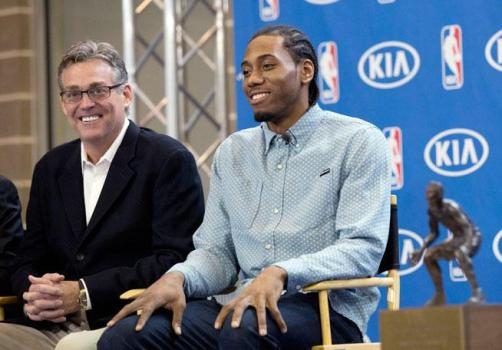 So, the draft is in the rear-view and free agency is open but that window is closing quickly for the Sixers.

And they still need a full-time general manager, a job coach Brett Brown has handled competently since Bryan Colangelo was broomed in the wake of Twittergate.

Maybe they can solve two problems with one fell stroke:

Hire a GM who will attract a high-profile star.

And according to the Inky, the Sixers are talking with the San Antonio Spurs’ GM R. C. Buford who might have an inside track to Kawhi Leonard.

Buford has been the Spurs’ general manager since 2002 and has been part of the organization since 1994.

He is a five-time NBA champion and two-time NBA Executive of the Year.

San Antonio’s string of dominance may be coming to an end, though, especially if Leonard ends up getting traded.

The 76ers parted ways with Colangelo in May due to a social media scandal in which it was determined that his wife operated multiple burner accounts on Twitter to support her husband’s work, criticize certain players and even release sensitive information.