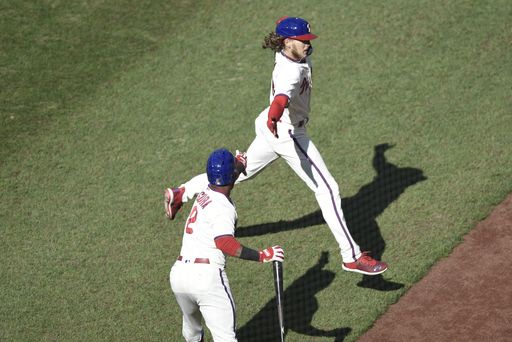 FOR PHILS, THIS IS THE WEEK THAT WAS IN THE PLAYOFF RACE!

So, the Phillies enter the last week of this strange 60-game season at this point:

27-26, four games behind Atlanta for first in the NL East and a half a game ahead of the the Reds for the 7th spot in the wild card after losing yesterday 6-3 to the Jays.

Teoscar Hernandez hit a two-run homer and Taijuan Walker tossed six sharp innings to help Toronto snap a six-game losing streak. The Blue Jays (27-26) held onto the eighth and final playoff spot in the American League. They return home to Sahlen Field in Buffalo, New York, for the final seven games to try and earn a trip to the postseason.

Walker (4-3) allowed four hits and struck out eight on a chilly, breezy day at the ballpark. Walker, acquired last month from Seattle to help Toronto’s playoff push, allowed only Did Gregorius’ RBI double off the right-field scoreboard in the second.

”I thought today was a huge win to give us momentum going into the next series. It’s going to be a big series for us,” Walker said.

Trailing 6-1 in the seventh, the Phillies loaded the bases with no outs with Harper up against righty Thomas Hatch. Harper struck out swinging. Alex Bohm’s grounder up the middle was thrown away by second baseman Joe Panik, making it 6-3.

Toronto’s bullpen handled it the rest of the way. Anthony Bass earned his sixth save.

Adonis Medina (0-1) allowed two runs over four innings in his big league debut for the Phillies. Heath Hembree gave up Jonathan Davis’ two-run double in the sixth and Hernandez’s two-run shot in the seventh for a 6-1 lead.

”I think things are going to turn around in our favor,” Davis said.