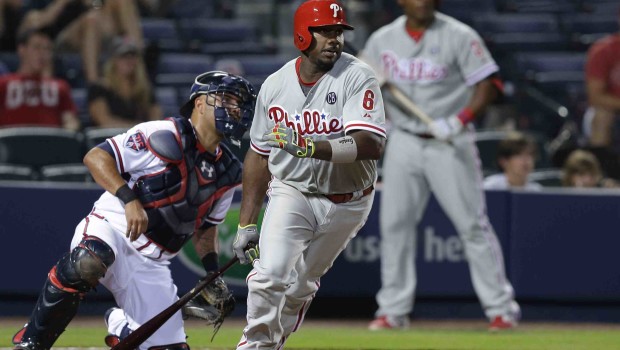 They blew seven scoreless innings by Cole Hamels, Jonathan Papelbon blew a save and Dom Brown embarrassingly misplayed an outfield fly (photo below) but the Phils beat the Braves in 13 innings, 6-1 on Ryan Howard’s run-scoring single (photo above) Even when they win a game over the a division leader, the Phillies try and try to lose.

Ryan Howard homered and drove in the go-ahead run in the Phils’ five-run 13th inning that led to a 6-1 victory over the Atlanta Braves.

Ben Revere led off the 13th win a sharp single up the middle off David Hale (2-2) before stealing second base and moving to third on a Jimmy Rollins’fly ball to right field. Following an intentional walk to Chase Utley, Howard hit a sharp grounder that took one hop past first baseman Freddie Freeman for an error as Revere scored from third.

Marlon Byrd followed with a run-scoring single up the middle. Howard scored on a fly ball to deep right field by Carlos Ruiz.

The Braves couldn’t score after Freeman tripled off the left-field wall with one out in the 10th.Domonic Brown reached for Freeman’s shot off Justin De Fratus but couldn’t make the catch. Brown then stood facing the left-field wall, apparently thinking Freeman’s blast was a homer. Revere ran over from center field to retrieve the ball.

De Fratus issued an intentional walk to Evan Gattis, who was replaced by pinch-runner Jordan Schafer. Justin Upton popped out and Chris Johnson struck out to end the inning.

Howard led off the second inning with a homer over the center-field wall.Cole Hamels threw seven scoreless innings before closer Jonathan Papelbon blew the 1-0 lead in the ninth.

Upton and Johnson led off the ninth with singles off Papelbon. With one out, Andrelton Simmons’ blooper fell in shallow center, allowing Upton to score the tying run from second.

Papelbon suffered only his second blown save in 17 chances.

Hamels gave up five hits with two walks and six strikeouts in seven innings. He has pitched 23 2-3 consecutive scoreless innings.

Braves right-hander Julio Teheran also was sharp. He allowed only one run on four hits and no walks in eight innings.

The Braves wasted their best scoring opportunity against Hamels when they loaded the bases with no outs in the seventh but couldn’t score. Simmons hit into a double play to end the inning.

Revere made the defensive play of the game in the fourth, catching a long drive by Freeman before crashing into the center field wall. Revere was limping briefly after banging his knees against the padded wall, but he remained in the game.