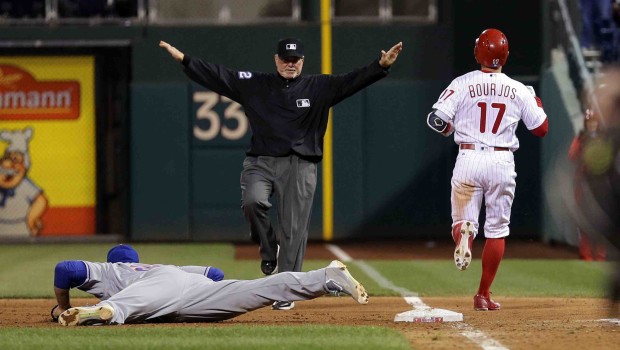 FOR PHILLIES’ PETER BOURJOS, BATTING 9TH IS NO BIGGIE!

The Phillies didn’t acquire Peter Bourjos for his bat.

He is a whiz in the outfield, and that’s an important part of the equation for a winning team.

But last night at the Bank, Bourjos won a game with his bat from a spot in the batting order reserved for pitchers!

In any other game Pete Mackanin has managed, and in any other game the Phillies have played since 1979, the pitcher’s spot would have been up with two outs and the winning run on third base in the 11th inning.

But because the lineup “just looks better” to Mackanin, with Bourjos hitting ninth and Jeremy Hellickson — the Phillies’ starting pitcher in their 5-4 win over the Mets — initially batting No. 8, it was Bourjos who came to the plate and sped down the first-base line (above), just beating the throw across the diamond from David Wright and allowing Freddy Galvis to score the winning run.

“Looking at it now, it’s pretty funny,” said Bourjos, who also tied the game with a single in the seventh that ultimately forced extra innings.

“He came through twice big for us,” Mackanin said. “We’re happy for that.”

The Phillies’ right fielder entered Wednesday’s game hitting .167 with an on-base-plus-slugging-percentage of .472. But he went 2-for-5 with two RBIs, doubling his season total in one night. In the seventh, Bourjos went the other way to drive home David Lough.

It marked the first time since June 1, 1979, that the Phillies had anyone but a pitcher bat ninth in the starting lineup, playing in a National League stadium. The last position player to do so was shortstop Bud Harrelson, who went 1-for-3, with Steve Carlton batting eighth.

Bourjos almost didn’t get the opportunity for his 11th-inning heroics.

After Galvis doubled, a wild pitch advanced him to third with one out. The Mets then began to walk Emmanuel Burriss — pinch-hitting for Jeanmar Gomez in the spot ahead of Bourjos — but two pitches into the intentional free pass, they changed course. Burriss attempted a squeeze play, with Galvis rushing home from third, but he bunted foul.

“I would’ve liked to win a game with a squeeze,” Mackanin said.

“I missed it by about six inches or so,” Wright said.

Two pitches later, the ball came right back to Wright, this time hard on the ground. He made a backhanded snag and quickly threw across his body in a hopeless attempt to beat the speedy Bourjos to first. Galvis scored, and the Phillies had won.

Not long after, Galvis doused Bourjos with a energy drink bath.

“I didn’t feel comfortable until I touched the bag,” Bourjos said.

Mackanin said before the game he’s never been a fan of hitting the pitcher eighth. But with Bourjos collecting two clutch hits from the No. 9 spot, Mackanin now has a decision on his hands.

“It worked out tonight,” he said. “We’ll see. Like I said, once he starts swinging the bat better, like I know he can, then I probably won’t do that. It just happened to fall into place tonight.”

The Phillies then had one more scare. Bourjos, now batting with two outs after Burriss flied out, hit a towering popup into foul territory behind third base. Wright chased it to the stands, where it looked like it would be uncatchable, but the wind brought it back within reach. The Mets’ third baseman tumbled into the wall and was unable to make the grab.