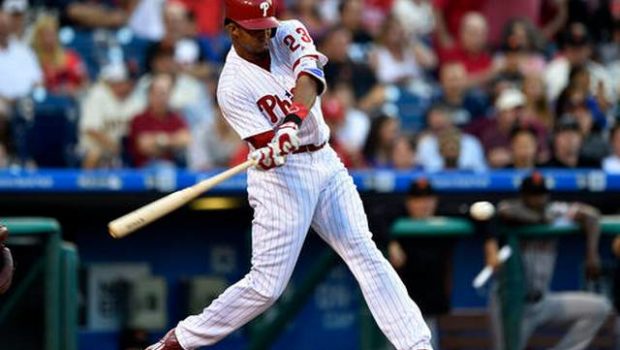 FOR PHILLIES’ OF AARON ALTHERR, THE FUTURE IS NOW!

Aaron Altherr is making a great impression in his tryout to be a big piece of the 2017 Phillies.

He went 3-for-5 with a home run and five RBIs in last night’s 13-8 victory over the Giants at Citizens Bank Park.

He hit a two-run home run to right field in the first inning against Giants ace Madison Bumgarner. He singled and scored in the second inning and singled to center to score two runs in the eighth inning to break an 8-8 tie.

“Definitely a great feeling, especially against a pitcher like Bumgarner,” Altherr said.

Altherr is hitting .333 (6-for-18) with two homers and eight RBIs in five games since returning from the 60-day disabled list because of a torn tendon in his left wrist.

He had been a projected everyday outfielder before the injury, but he is expected to play regularly through the remainder of the season as the Phillies evaluate their outfield options for 2017.

“Altherr is making a good impression again,” Phillies manager Pete Mackanin said. “I love the way he plays defense. He just glides around out there. He’s swinging the bat very well right now. That last at-bat he was just trying to make contact, he hit the ball up the middle and got us two big runs.”

Altherr showed that a little studying can pay off, too. Bumgarner threw him a first-pitch fastball in the first inning before coming back with an 0-1 cutter away.

“I was looking for a cutter away,” Altherr said. “I wouldn’t say I was trying to hit a home run, but I had seen a lot of video and it’s something you just prepare for. You know he likes his cutter so I was looking for it. I just put a good swing on it.”

Altherr stepped to the plate with runners on second and third and one out in the eighth. Giants right-hander Sergio Romo got Altherr into a 1-2 count when he threw him a sinker. He laced the ball up the middle for a hit to score both runners, giving the Phillies a 10-8 lead.

“With two strikes you’ve got to find a way somehow to put the bat on the ball,” Altherr said. “Thankfully, I was able to do that.”