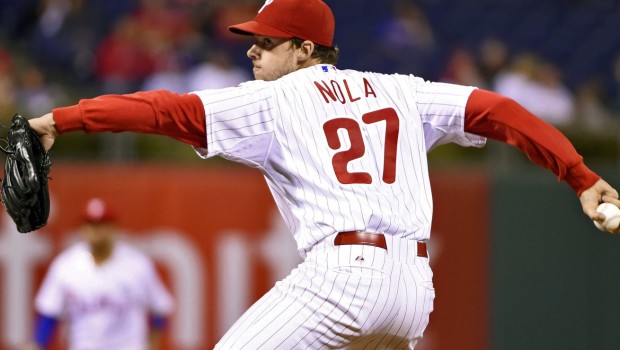 Is the Phillies’ lack of offense starting to affect their young pitchers?

Since May 23, the only break from baseball’s top offenses the Phillies have had were four games vs. Milwaukee.

They’ve played 19 others against the Tigers, Cubs, Nationals and Blue Jays — all of whom are among the 12 MLB teams that have scored more than 300 runs this season.

They closed the stretch with Aaron Nola allowing eight runs over three-plus innings in a 13-2 loss to the Blue Jays on last night.

“It’s tough for the offense to score when I’m not really giving them a chance to start off the game,” said Nola. “My job is to keep the game as close as I can and to keep them in the game.”

With little support coming offensively, it would be easy for a starter to feel a weight on his shoulders.

“I’ve been asked has there been any issues with pitchers complaining about offense,” manager Pete Mackanin said. “Even though I haven’t seen it, it’s gotta work on you after a while. Where they might feel they can’t afford to make a bad pitch, so they’re not attacking the hitters as much as they did before.”

Since their first game in Detroit on May 23, Phillies’ starters have posted a 5.93 ERA. That mark would be the worst in baseball for a full season. The closest is the Twins, 31 points lower at 5.62.

In those games, Mackanin’s squad is 5-18. That’s the result of an offense averaging more than two runs fewer per game than its starters allow, when adjusted to nine innings. The 3.22 runs per game the Phils are scoring over this stretch is on par with their offensive production, even when the team was 24-17. Their starters’ ERA, however, has jumped more than two full points, from 3.57 before May 23 to 5.93 since.

“We started a road trip against Detroit, and you talk about a formidable lineup,” Mackanin said. “That might’ve been the start of it. Then the Cubs … the guys are watching, they know they can’t make mistakes, which leads to making mistakes, rather than being aggressive. …

Mackanin may sense it beginning to take a toll on his staff, but he clarified no player has come complaining to him. The starters remain in solidarity after their starts, too.

“I don’t think so,” Jeremy Hellickson said when asked if the offense was starting to wear on the pitching staff after his start May 30, in which the Phillies scored three runs. “I can’t really speak for everybody, but us as a staff, we just have one job every time we go out, whether we score one run or 10 runs, we’ve just got to keep our team in the game.”

“No, you go out there and you don’t try to give up any runs,” Nola said after his May 21 start when asked if the low margin of error for starters has an effect. He had allowed two earned runs over seven innings, but the Phillies only mustered one run.

Jerad Eickhoff, Vince Velasquez and Adam Morgan have been asked similar questions and given similar answers. It’s unlikely any would give a treasonous answer to the media. Mackanin, though, is around his team more than just about anyone.