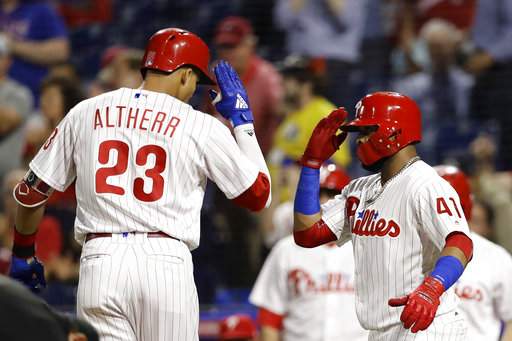 FOR PHILLIES, A 14-RUN OVER MARLINS IS TOO LITTLE TOO LATE!

Aaron Altherr homered twice and drove in five runs, leading the Phillies to a 14-2 victory over the visiting Miami Marlins.

Altherr connected for a two-run shot in the second for his first homer since June 6. He added a three-run drive in the fifth and finished with four hits.

“I didn’t make any mechanical adjustments, didn’t think about anything like that,” Altherr said. “Just confidence was the biggest thing. I feel whenever you’re confident up there at the plate, good things are going to happen.”

The Phils stayed 7 1/2 games back of NL East-leading Atlanta, which beat Washington 10-5 for its sixth straight win. The Phillies were in prime position to make the postseason before stumbling in recent weeks.

Eflin utilized his four-seam fastball more against the Marlins than in recent outings.

“You see how brilliant he can be,” manager Gabe Kapler said.

J.T. Realmuto homered for Miami, which dropped its fourth straight. Wei-Yin Chen (6-11) was tagged for five runs and seven hits in four innings.

Quinn finished with two hits and three RBIs after being sidelined by a small fracture in his right foot. He hit a solo drive in the second and drove in two runs with a bases-loaded fielder’s choice in the fourth.

“I guess I probably need to do some more homework for the games on the road,” Chen said. “Maybe that’s what I need to do.”