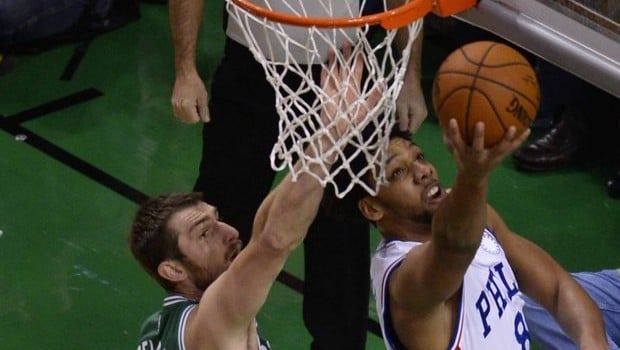 So, the Jahlil Okafor doubters — John Gonzalez, especially — can only hope that the Sixer rookie center’s first game was an aberration.

Stevens had to change his defense, going to the bench early. He decided to double team Okafor after his solid start.

“I know Okafor is really good, but I thought we would mix that in later in the game,” he said. “He played really well, got it going early in the game and forced us to make decisions.”

Okafor, the third overall pick in this year’s draft, led the 76ers with 26 points. Nerlens Noel had 14 points and 12 rebounds, and Isaiah Canaan scored 18 points.

True, the Celtics won the season opener as reserve point guard Isaiah Thomas had 27 points and seven assists, and the Celtics beat the Siers 112-95 on Wednesday night.

“Well our bench has to be a great source of energy, scoring for us and everything else for us,” Stevens said after Boston’s reserves outscored their counterparts, 67-15.

Coming off a 40-42 record and a seventh-place finish in the Eastern Conference in Stevens’ second season, the Celtics entered their 70th year in the NBA loaded with a roster full of what could be described as complimentary players who could fill different roles.

It was Thomas that provided the spark after missing his first five shots from the floor.

“That’s my job. I’ve got a job to do. I have confidence in myself and my teammates do, too,” said Thomas, who finished 10 of 19 from the floor.

Twelve of the 15 players on the 76ers’ opening roster had two years or less of NBA experience. They went 18-64 last season, and then drafted Okafor out of Duke.

The undermanned 76ers relied mainly on seven players due to injuries.

“I knew that our offense was going to be poor,” Sixers coach Brett Brown said. “We just haven’t played together, so I ended up turning it into: Let’s just post our bigs and sort of go (simple).”

Boston recovered from an early nine-point hole, triggered by a solid start from Okafor, who connected on his first five shots.

“That definitely got me in a good rhythm,” he said.

The Celtics grabbed control in the final period, opening an 86-71 lead on Jonas Jerebko’ transition 3-pointer from the left corner.

“Any time they cut it close, I thought we responded,” Stevens said.

The Sixers trailed by 11 at the break, but closed to 72-67 on Hollis Thompson’s 3-pointer from the left corner. Boston then scored the final seven points of the third. Thomas, who had 13 in the quarter, nailed a 3 from the right wing in the final seconds.