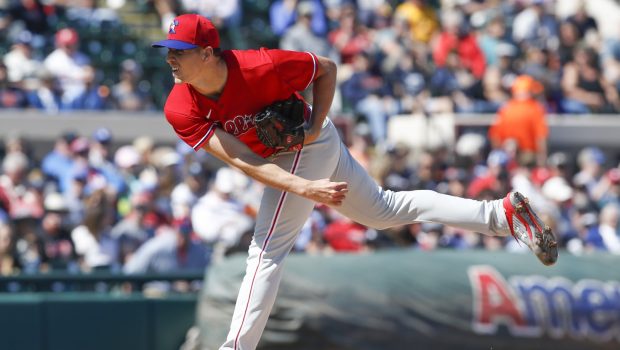 The Phils and Tigers ended at 8-8 in yesterday’s spring training opener.

But there was bad news for Phils starter Nick Pivetta:

He allowed three runs off five hits in less than two innings.

Opening the second inning, Pivetta gave up two hits and a run to the first two batters C.J. Cron and Jonathan Schoop. The next two batters singled, the second driving in Schoop, and an infield single two batters later made it 3-0 Detroit.

That’d be the last batter Pivetta would face before Joe Girardi brought out the hook in favor of Cole Irvin.

Pivetta will get many more opportunities this spring as he competes with Vince Velasquez for the fifth starter’s job.

Last year Pivetta struggled mightily, earning a demotion not just to the bullpen, but to the minors.

In 17 major league relief appearances, Pivetta had a 4.38 ERA with 31 strikeouts and 14 walks. When starting in 69 innings over 13 starts Pivetta’s ERA jumped to 5.74 averaging nearly four fewer strikeouts per nine innings.