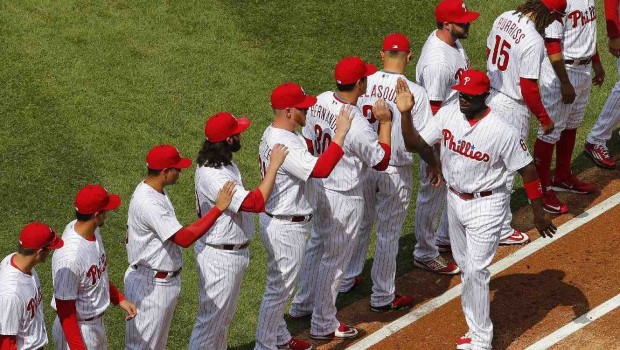 As home openers go, yesterday Phillies-Padres game at the Bank had all the right elements:

Ryan Arcidiacono and Daniel Ochefu of the NCAA championship Villanova Wildcats throwing out the first pitch;

The weather was April 11 perfect;

And the Phillies, as they figure to do a lot this season, fell behind 3-0 before tying it up 3-3!

Oh yes, the Padres squeezed and replayed their way to a 4-3 victory over the Phillies.

Padres third baseman Alexi Amarista dropped a perfect bunt between the mound and first-base line to score Derek Norris from third with one out in the seventh inning to give San Diego the lead. Wil Myers’ solo home run to left field in the fourth inning handed the Padres a three-run lead before the Phillies scored a run each in the fourth, fifth and sixth to tie the game.

“I didn’t like the call, but we have to live with it,” Phillies manager Pete Mackanin said. “We just have to get past it. We had opportunities after that.”

The Padres’ bullpen combined for four scoreless innings, capped by Fernando Rodney’s first save with San Diego. Starter Andrew Cashner, who allowed three runs over five innings, consistently dialed up his fastball to the high 90s, and he was ahead of Phillies hitters all afternoon.

“I always try to take aggressiveness out there,” Cashner said. “I think sometimes it maybe gets me in a little bit of trouble, but I think it was a lot better today.”

With the bases loaded and no one out in the bottom of the sixth, the Padres called on lefty reliever Brad Hand, who got pinch-hitter Darin Ruf to pop up to shallow left. That was only the beginning. Left fielder Myers never saw the ball off the bat, and shortstop Alexei Ramirez couldn’t make the play as he backtracked. But third-base umpire Will Little ruled it as an infield fly, and — although a run scored — Ramirez threw to third for a double play, which was confirmed by review.

“It’s the umpire’s call,” Ramirez said. “We’re the players. We have to react to what’s going on on the field. If that’s the call they’re going to end up making, then that’s what they’re making. You just react and have to make the play.” More >

Said crew chief Ted Barrett: “The criteria for an infield fly is a batted ball in the air that a fielder can field with ordinary effort. And that’s what the third-base umpire ruled. … Of course, the confusion a lot of times is people think that the depth of the fly ball into the outfield comes into play. And that’s not a factor. It’s actually [whether it can be] easily caught by an infielder, with ordinary effort.”

The Phillies set up their rotation to have right-hander Aaron Nola pitch the home opener. He allowed four runs in seven innings, walking none and striking out a career-high nine. In 14 innings, Nola has struck out 17 and walked none. Entering Monday, no pitcher in baseball had double-digit strikeouts without allowing a walk.

“Nothing affects him,” Phillies catcher Cameron Rupp said. “Nothing fazes him out there. He doesn’t show emotion at his highest point or when he’s down in the ditches. He battles and he knows how to pitch and stay within himself.” More >

With runners on the corners in the seventh, Amarista dropped a perfect bunt up the first-base line, allowing the go-ahead run to score. Amarista, making his debut, also singled and hit a fly ball that was tracked down by center fielder Odubel Herrera at the wall.

“Alexi Amarista, that was great execution on his part,” said Padres manager Andy Green. “That’s not the easiest thing in the world to do — bunt a curveball that’s down. He got a great bunt down there.”

Mackanin pinch-hit Ruf for Ryan Howard with the bases loaded and no outs in the sixth inning, when Padres left-hander Hand entered the game. Mackanin said he would platoon Howard and Ruf this season, but Monday really drove home that point.

“You act like it’s the first time it happened,” Howard said. “It’s not a surprise.”

“I thought it was the perfect time to do it, blow the game wide open,” Mackanin said.