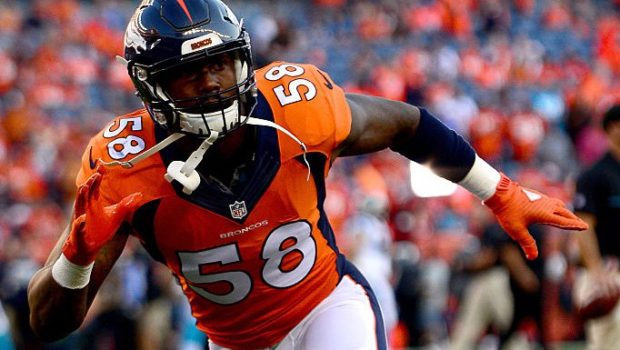 Not bad for a Super Bowl rematch!

The Denver Broncos, behind Trevor Siemian’s solid starting debut, rallied to defeat Cam Newton and the Carolina Panthers, 21-20, on a warm Thursday night to open the season at soon-to-be-renamed Sports Authority Field at Mile High.

“It was fun, it was good to play a whole game,” said  Siemian, who  completed 18 of 26 for 178 yards, one touchdown and two interceptions in his first “whole” game since his senior season at Northwestern in 2014. “I’m learning, too, still.”

The Broncos had to survive a 50-yard field goal attempt by Carolina’s Graham Gano, whose kick sailed wide left with 4 seconds remaining. Gano had made the 50-yard field goal moments before, but after Broncos coach Gary Kubiak called a time out. When Gano made his first kick, he hit the right upright and it bounced in. After a high snap, he may have overcorrected when he missed left with the kick for keeps.

The Broncos trailed, 17-7, entering the fourth quarter. Two Anderson touchdowns gave Denver the lead. Denver’s defense then had to overcome a questionable hands to the face penalty called on cornerback Chris Harris Jr. that turned a fourth-and-21 incompletion into a fresh set of downs for Netwon.

After reaching the Broncos’ 32, Gano came on for the make-or-break kick. He broke.

“What do they call it, the ball don’t lie,” Harris said, laughing, referring to a basketball term when a player misses a free throw on a foul that shouldn’t have been called.

The first game of 2016 was nothing like the final game of the 2015 season. The Broncos were down most of the game largely because they had committed three turnovers to none by the Panthers

In Super Bowl 50, Carolina was doomed by turnovers and was thwacked by the Broncos, 24-10.

But over the years, no matter how bad the Broncos have looked through three quarters, they always have a chance so long as the game is played at 5,280 feet above sea level and there is a fourth quarter left to play.

Anderson was the offensive hero. His first touchdown was a 25-yard catch-and-run on a screen pass from Siemian. It was the first touchdown pass of Siemian’s career. On the play, Carolina put on a ferocious rush. Once Siemian got it to Anderson, there was little question Carolina’s defense was caught.

“I knew it was a big play if I could get it him,” Siemian said.

Following an interception by Harris that gave his offense the ball at the Carolina 27, Siemian and Anderson combined to finish off the short-field drive. It was Anderson, with a little help from a push by left tackle Russell Okung and pull by fullback Andy Janovich, who converted a fourth down and half-yard situation at the Carolina 1 ½ yard line. Anderson later plunged in from the 1 yard line to give the Broncos their first lead with 9:30 remaining.

Siemian played well for a guy who had never played an NFL game before. He completed 18 of 26 for 178 yards and a touchdown. He also threw two interceptions and took two sacks when a more seasoned quarterback might have thrown it away.

Still, against a stout Carolina defense, it was an impressive win.