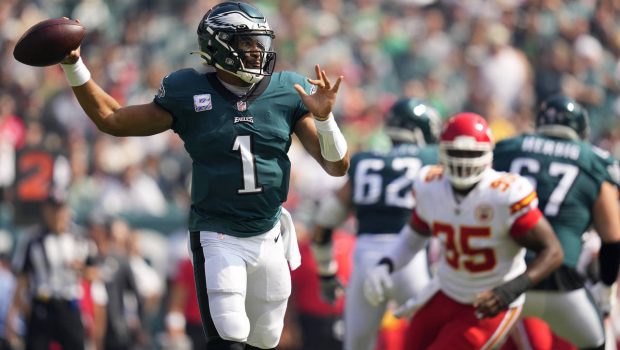 Which may be deceiving.

Because there was never a moment when it looked like the Eagles could beat the Chiefs at the Linc.

However, the Eagles had some notable positives, especially coming off a wipeout in Dallas last Monday night.

So, this was an Eagles loss to grow on.

Patrick Mahomes threw five touchdown passes as Andy Reid returned to Philly and earned his 100th career win with the Chiefs, becoming the first coach in NFL history to win 100 games with two teams. Reid’s 140 victories with the Eagles are the most in franchise history.

Jalen Hurts threw for a career-high 387 yards and two TDs but Philly (1-3) couldn’t keep up with Kansas City’s high-powered offense. The Eagles had three touchdowns negated by penalty and settled for field goals three times inside the red zone.

Mahomes tossed TD passes underhanded, overhanded and shoveled one on Kansas City’s three possessions in the first half. He finished with 278 yards passing and his interception was the only possession the Chiefs didn’t score a TD. Hill had 11 catches for 186 yards.

Mahomes flipped a 1-yard TD pass underhanded to Clyde Edwards-Helaire for a 7-3 lead in the first quarter.

He threw a normal 6-yard TD pass to Hill to give the Chiefs a 14-10 lead. Mahomes set up the score a few plays earlier on first-and-20 from the 42 with a beautiful 32-yard pass to Hill, who made an excellent over-the-shoulder, fingertip catch near the sideline.

His 2-yard shovel pass to Jody Fortson increased Kansas City’s lead to 21-13 with under a minute left in the first half.

Darrel Williams ran in from the 1 to extend the lead to 28-16 but the Eagles answered with Kenneth Gainwell’s 7-yard TD run to get within 28-23.

Mahomes then connected with Hill on TD passes of 12 and 44 yards.