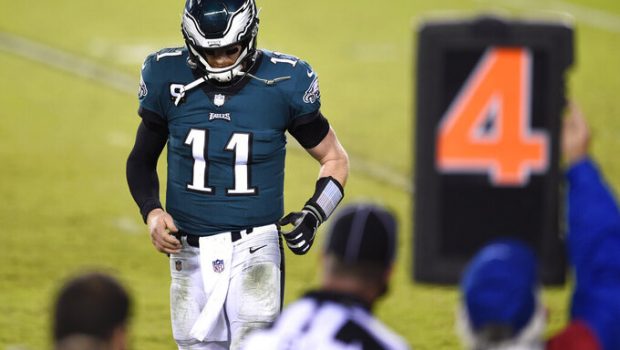 FOR GOD’S SAKE AND HIS, EAGLES SHOULD BENCH QB CARSON WENTZ!

I don’t know what’s up with Carson Wentz.

Three seasons ago he was on his way to an MVP before he wrecked his knee.

Then he had a back issue, then last season’s concussion in the playoffs against the Seahawks.

And now he looks like a shot fighter, who has taken too many punches and doesn’t know when to quit.

The Eagles should help Wentz and sit him down and let his body and mind heal.

Four months ago, he was regarded as a top-10 quarterback.

“I’ve seen Houdini in him,” one NFC exec told ESPN.

Wentz’s career has reached a boiling point in 2020, accentuated by a curious lack of playmaking, an affinity for turnovers and a Eagles offense as injured as it is inept.

NFL executives and coaches ranked Wentz, 27, a former No. 2 overall pick, as the league’s eighth-best quarterback in ESPN’s summer project ranking top players at each position.

The year before, Wentz earned a four-year, $128 million extension just three years into his NFL career, cementing his place as the franchise’s long-term solution at the quarterback position.

Wentz is on pace for at least 20 interceptions after throwing no more than seven in each of his past three seasons.

A pair of lethargic performances against the New York Giants and Cleveland Browns (back-to-back losses) prompted the Eagles to increase backup Jalen Hurts’ first-team practices before Monday’s 23-17 loss to the Seattle Seahawks, which featured another shaky performance from Wentz.

Now, Wentz’s time in Philly is on the line.