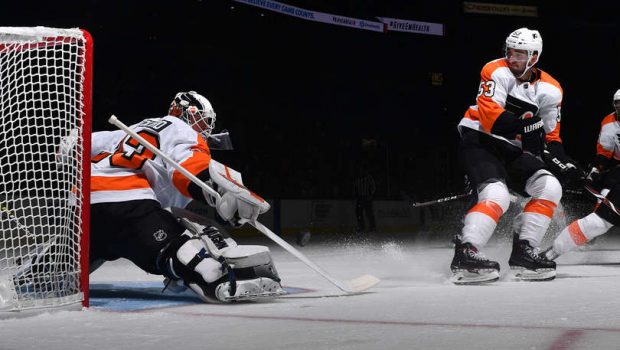 Atkinson scored his goals 3:08 apart to give the Blue Jackets the lead after they entered the second trailing by one.

Artemi Panarin had two assists, and Sergei Bobrovsky made 32 saves for Columbus (4-2-0).

Travis Konecny had a goal and an assist, and Claude Giroux had two assists for the Flyers (3-4-0).

Calvin Pickard (above) allowed six goals on 28 shots in his second start for Philly.

The Flyers gave up 11 goals in their past two games; they defeated the Florida Panthers 6-5 in the shootout Tuesday.

“It’s got to stop. This high-risk, almost summer hockey is getting out of hand.”

The Flyers took a 1-0 lead at 10:06 of the first period when Konecny scored his first goal of the season with a redirection of a Robert Hagg shot.

Anthony Duclair scored while falling to the ice at 17:53 to tie the game 1-1. He took a stretch pass from Ryan Murray and skated to the right face-off dot before losing an edge and falling while attempting to cut to the middle. While on his knees, he got the puck and rose to his skates. He was tripped and started falling back to the ice but was able to beat Pickard five-hole.

Bobrovsky, who allowed an NHL career-worst eight goals to the Tampa Bay Lightning in an 8-2 loss Saturday, was beat past his glove by Couturier’s wrist shot from above the left face-off circle to put the Flyers ahead 2-1 with 50 seconds left in the first.

It was the fourth time in the past six periods that the Blue Jackets gave up a goal in the final minute.

“Our first period was our best period,” Giroux said. “We had a good game and stuck with it.”

Atkinson tied it 2-2 at 1:34 of the second, converting a goal-mouth pass off the rush from Panarin.

“We talk about that play a lot, going as far as I can backdoor,” Atkinson said. “And on that play, he’s going to find me every time, just have my stick on the ice.”

The two combined again at 4:42 to give Columbus a 3-2 lead. Panarin passed the puck across the neutral zone and off the wall for Atkinson, who skated around Hagg down the right wing and deked Pickard.

Oskar Lindblom scored on a wraparound at 1:07 of the third period to get Philadelphia to within 4-3, but Josh Anderson scored unassisted at 15:12 off a turnover to put Columbus up 5-3 and Sonny Milano made it 6-3 at 17:48 with his first goal of the season.