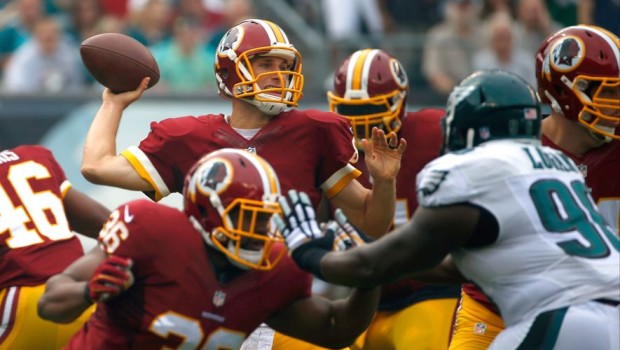 FOR EAGLES, STOPPING COUSINS IS KEY TO BEATING REDSKINS

As the Eagles prepare to play their win or go home game Saturday night against the Washington Redskins at the Linc, their focus has turned to Kirk Cousins.

The Redskins boast their fair share of offensive weapons, with tight end Jordan Reed and wide receiver DeSean Jackson, but when asked about the threats he sees when game-planning for Washington, Eagles Coach Chip Kelly said none stands out as much as Cousins.

The quarterback enters Saturday’s game on a hot streak, owning a 3-1 record in his last four games after completing 88 of 119 passes for 1,140 yards, 12 touchdowns and just one interception.

“You know, he’s got a real good command of what Jay is trying to get accomplished there and he’s completing a high percentage of passes,” Kelly said of Cousins, whose completion percentage of 69.7 leads the NFL, and whose passer rating of 97.2 ranks eighth. “You look at last week’s game, he also had a touchdown run. He’s athletic when he’s dropping back so that if you’ve got coverage, he can beat you with his feet, but he’s always got his eyes downfield looking to throw. He’s obviously got some really good weapons to throw to, but I think it’s really the play of Kirk right now that’s getting their offense going.”