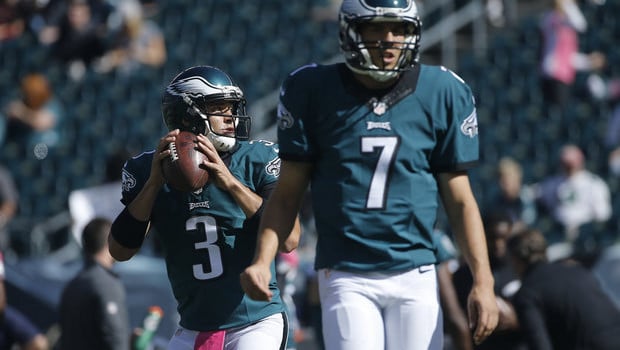 FOR EAGLES, SANCHEZ-FOR-BRADFORD IS A WASH — BY THE NUMBERS!

Bradford (right) has been inconsistent in Chip Kelly’s offense, but Sanchez is an experienced mediocrity!

There has been no official announcement by the Eagles as to the physical condition of quarterback Sam Bradford, who got sacked like a rag doll on Sunday and suffered a non-throwing left shoulder injury and a concussion.

So, we are stuck with the terminally mediocre Mark Sanchez.

Sanchez threw a back-breaking pick late in a tight game. And Bradford (72% completion over last six quarters) looked good on Sunday and was coming off his best performance of the year last week in Dallas.

But in Chip Kelly’s system, Sanchez and Bradford are virtually identical—if not better under Sanchez. Take a look:

Perhaps that’s why Kelly said the offense won’t be much different with Sanchez in over Bradford. Or why other Eagles don’t think there’s much of a drop off at all.