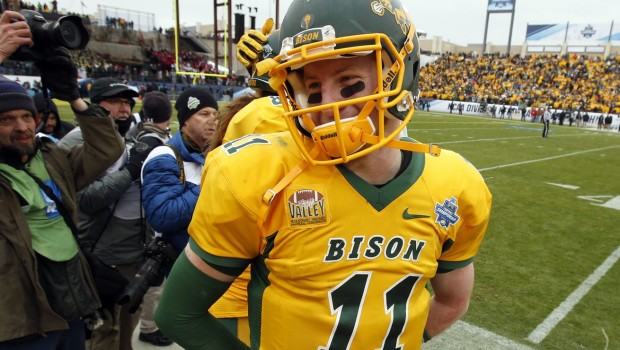 FOR EAGLES’ QB CARSON WENTZ, THE FUTURE MAY BE NOW!

In the immortal words of their former president Joe Banner:

The Eagles went all in last night!

After trading away a boatload of draft picks to acquire the No. 2 overall pick in the NFL draft, the Eagles selected North Dakota State quarterback Carson Wentz to be the team’s quarterback of the future last night.

Wentz was taken after the Los Angeles Rams, who also traded up a couple of weeks ago, plucked Cal’sJared Goff with the No. 1 pick.

Wentz has prototypical size at 6-foot-5 and 237 pounds, and ran a pro-style offense at North Dakota State. He has above-average arm strength and is athletic.

The two big knocks on Wentz have been the perceived inferior competition he faced at North Dakota State, and a relatively small sample size of playing time in his college career. He was a starter for just a year and a half – a wrist injury sidelined him for more than two months this season – and threw just 612 total passes in that time.

“I’m just glad it’s finally coming to a close,” Wentz told USA TODAY Sports Wednesday as he was leaving an NFL event. “I just want to get back to football.”

Now he can do that, though he may be sitting on the bench for the foreseeable future.

The Eagles spent $34 million of guaranteed money this offseason to re-sign Sam Bradford – whom executive vice president of football operations Howie Boy Roseman maintains is the team’s starter – and to sign Chase Daniel.

Bradford has since requested to be traded, but all indications from the Eagles are that they are not interested in moving him.

Wentz became just the fifth non-FBS quarterback to be drafted in the first round since Division I-A was formed in 1979. He also became the highest FCS quarterback ever selected, beating out the late Steve McNair, who was taken third overall in the 1995 draft.