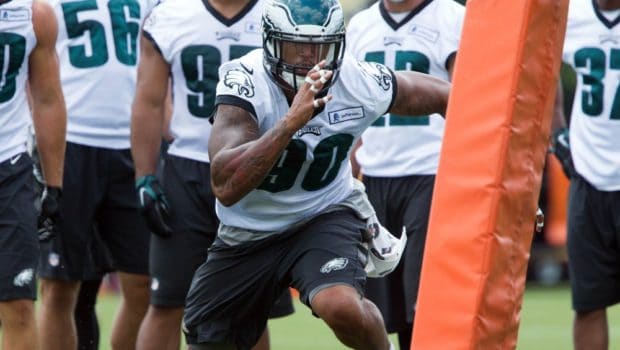 FOR EAGLE MARCUS SMITH, IT’S SUCCEED IN THE 4-3 D OR BUST!

When the Eagles go to training camp in 10 days, it is safe to say no one has more to gain that 2014 No. 1 draft pick Marcus Smith.

And more to lose.

The Eagles shocked everyone when they selected Louisville defensive lineman Smith. Many draft experts labeled the pick as a reach.

As of yet, Smith has failed to make any impact on the field and has not lived up to first round pick expectations.

In fact, he has become a laugh line as one of the biggest draft busts in Philly history.

Right up there with Sixer bust Shawn Bradley in 1993.

Smith is transitioning back to his natural position, defensive end, in new defensive coordinator Jim Schwartz’s 4-3 ‘wide-nine’ technique. Smith spent the last three seasons of his college career as a defensive end. Reverting to his original position should pay huge dividends.

Smith was a very productive pass rusher for the University of Louisville. He recorded 25.5 sacks, 32.5 tackles for loss, two interceptions and eight forced fumbles, in 36 games.

Finding a role in the Eagles defensive line rotation won’t be easy. Currently, the Eagles already have three established defensive ends on the roster in Vinny Curry, Connor Barwin, and Brandon Graham. As luck would have it for Smith, defensive line depth plays a pivotal part in Jim Schwartz’s attacking scheme.

Smith was only on the active game day roster 21 out of 32 possible games for the Eagles from 2014-2015. Chip Kelly openly criticized the 2014 first round pick. Kelly stated Smith needed to be more consistent on the practice field before he considered giving him any playing time.