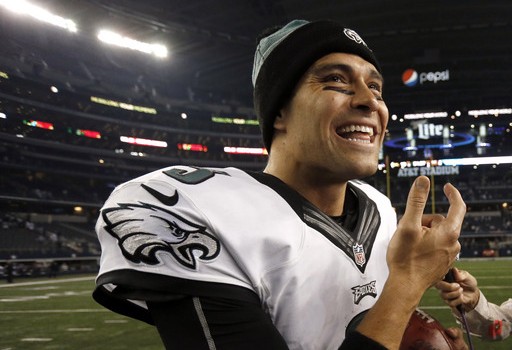 FOR EAGLES IN PITIFUL NFC EAST, IT’S NEVER OVER TILL IT’S OVER!

Okay, the NFC East is a pitiful shell of its once powerful self, with the New York Giants leading at 5-5, the Eagles and Skins tied at 4-5 and the Dallas Cowboys bringing up the rear at 2-7.

How bad is this division?

So bad that Tony Romo’s impending return from injury has Cowboys fans dreaming of a comeback!

Eagles’ running back Ryan Mathews suffered a concussion Sunday. Worse yet, quarterback Sam Bradford sustained a concussion and an injured shoulder. There’s a chance this team could be leaning on backup Mark Sanchez (above) for a few weeks, although that’s not the worst thing considering his experience.

Philly’s schedule is interesting, particularly considering the next two cupcakes – the Tampa Bay Buccaneers and Detroit Lions – have a little hop in their step. The Buccaneers because they’re coming off a win Sunday, and Detroit because it hasn’t lost a game since Martha Firestone Ford stepped in and fire hosed the front office. Sometimes teams respond to change and winning.

That makes both dangerous. The rest of the non-divisional games are against the Bills, New England Patriots and Arizona Cardinals, and then divisional tilts against the Redskins and Giants. With or without Bradford, that is some tough sledding.

Romo went up and down the sideline with that impossible-to-miss shirt on Sunday, the one emblazoned with the word “FIGHT”, which seemed to symbolize little of what the Dallas Cowboys have done without their star quarterback. And when Dallas’ seventh straight loss wrapped, a 10-6 clunker to the Tampa Bay Buccaneers, conventional wisdom suggested 2015 was over.

But this is the NFC East, a division in which mediocrity has been a season-long gift to Jerry Jones and his franchise. And it gave just a little bit more on Sunday, with the division-leading New York Giants losing to the New England Patriots and fanning that dim flicker of life for Dallas.

So breathe deep, Cowboys fans. The real starting quarterback is coming back next week against the Miami Dolphins, and the last gasp of the season begins now for Dallas. No matter how downtrodden anyone may be, there is no denying one basic fact: Romo’s return gives the Cowboys a chance – and at 35 years old, you don’t pull the plug on even the faintest opportunity.

New York split with Dallas this season, so the Cowboys could feasibly finish in an 8-8 or 9-7 tie and go to a series of tiebreakers for the division. After head-to-head games, the record within the division determines the NFC East champ. After that, it’s best win percentage in common games – on and on, into a headache of minutiae.

Dallas’ surest shot is to run the table and hope the Giants go 3-3 the rest of the way. And that’s not out of the realm of possibility for New York. Every team remaining on New York’s schedule is going to be either fighting like mad to secure a playoff berth or positioning itself for home-field advantage.

The tough non-division opponents are the Minnesota Vikings (on the road), the New York Jets and the Carolina Panthers. That trio is a combined 21-6 right now. The in-division opponents are theWashington Redskins (on the road) and the Eagles in a game that will likely mean something to coach Chip Kelly. Even the Dolphins game will be dangerous, playing on the road on Monday Night Football. That schedule is not a cakewalk.

Washington (4-5) is feeling really good. Quarterback Kirk Cousins is tossing touchdowns, and it’s all very exciting. But Washington has four wins and none of them are against winning teams. It has the Panthers on the road next week, divisional games against the Giants and Eagles, and non-divisional games against the rejuvenated Buffalo Bills and Chicago Bears. Oh, and Dallas gets to face the Redskins twice. There’s plenty of potential inside all of this for a collapse.