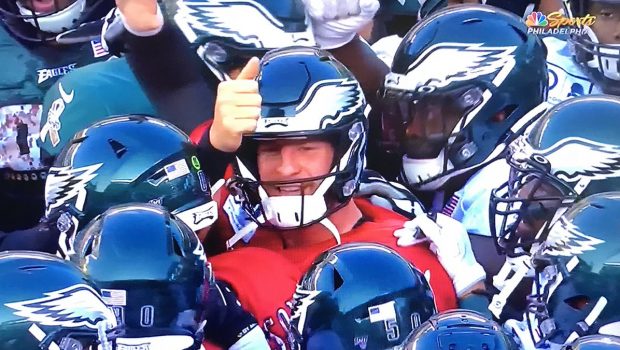 FOR EAGLES CARSON WENTZ, IT WAS A TALE OF 2 HALVES!

In the first half, he was 6-of-16 with two interceptions. Then, in the second half, Wentz drove the Eagles down the field with only half of his receiving corps and put them in position to record the win. The biggest play of the game was when Nelson Agholor dropped a perfect pass down the left sideline that would have had a chance to go for a touchdown with just over a minute left.

The Eagles’ offensive line showed that four out of the five are still one of the dominant offensive line units in the league. The weak spot was left guard, where Issac Seumalo struggled with Grady Jarrett and the stunts from the outside.

Matt Ryan went after Ronald Darby in coverage early and often, and Darby came up on the wrong side of many of those. He was beaten deep multiple times, missed a tackle after a catch, and while he did have an interception, it could hardly have been any easier after an underthrown ball by Ryan.

The Eagles took advantage of some injuries along the Atlanta offensive line, but they also won in pass-rushing matchups on the edge. While the defense only sacked Ryan once, Derek Barnett and Brandon Graham had him under pressure on several occasions, beating Atlanta’s tackles very quickly at times.

JJ Arcega Whiteside was a non-factor in this one. He had an opportunity to rise to the occasion with so many injuries to the Eagles’ skill players, but he still struggled to make plays and finished the game with one catch for four yards.