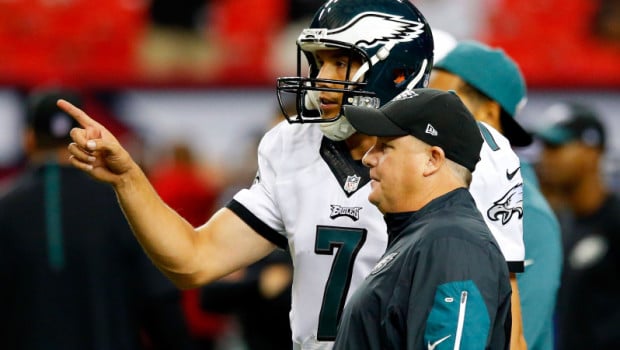 FOR EAGLE CHIP, ADAPTABILITY IS KEY TO ADJUSTING TO DEFENSES

Through three games in 2015, the Eagles have a grand total of zero offensive plays of 40 or more yards: Their longest pass completion so far this season is 32 yards, and their longest run is 27 yards. So what has gone wrong to keep the Eagles from making big plays?

Kelly (above with QB Sam Bradford) thinks scheme changes, not personnel changes, are responsible for the Eagles’ reduction in big plays.

“Two years ago we set an NFL record for explosive plays,” Kelly said today. “Now no one plays those coverages.”

But whether it’s personnel changes on the Eagles or schematic changes from the Eagles’ opponents, either way, it’s Kelly’s responsibility to fix things. The Eagles have one of the worst offenses in the NFL through three weeks, which wasn’t what anyone was expecting when the alleged offensive genius was hired.

Kelly may be right about opposing defenses changing the way they play against his offense, but he’s being less than completely truthful if he doesn’t also acknowledge that his own personnel decisions have played a part in the Eagles’ declining number of big plays. The decision to cut DeSean Jackson after the 2013 season played a huge part in the reduction of big-play passes last year, as Jackson’s new team, Washington, led the NFL in pass plays of 40 or more yards, with 20 — 13 of which were caught by Jackson. LeSean McCoy had three runs of 40 or more yards in 2013, but Kelly traded him away this year.