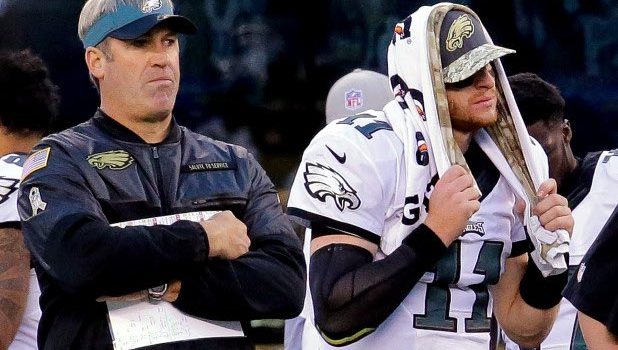 FOR DESPERATE EAGLES, PRIDE AND THE SEASON ARE ON THE LINE SUNDAY!

By Todd Harrison and the Associated Press

The Eagles’ season is on the brink, and Sunday’s game in New Orleans against hot-to-trot Saints could push it over the cliff in terms of the postseason.

Oddsmakers are listing the surging Saints, who lead the NFL in scoring with 36.7 points per game, as favorites by more than a touchdown.

”They’re still a good team no matter what their record is,” Saints running back Alvin Kamara insisted. ”They wouldn’t have won last year if they didn’t have the talent.”

Kamara’s take is no surprise to Birds coach Doug Pederson, who asserted that when you’re the defending champs, ”you get everybody’s best each week.”

Pederson even recalled pep-talks he gave his team last season in which he said, ”Listen, if you want to be one of the best teams in the league, we have to beat the best. And I know teams are saying that about us, and we just haven’t lived up to how we’re capable of playing in a couple of situations this year.”

A loss in New Orleans, combined with a Washington win, would put the Eagles three games down in the NFC East with six games left.

”They are a prideful group. They know how to win,” Saints quarterback Drew Brees said. ”They have a ton of playmakers over there. We have our work cut out for us and we know what type of game it’s going to be. We know they’re coming in hungry for a win. Both teams have a lot to play for.”

The Eagles have scored only 21 points in the first quarter, including 14 against the Giants after a turnover set up a short field. Pederson scripts the first 15 plays and they have often resulted in more negative yards than positive.

Pederson said he bases his script on watching film of the opponent and tries to avoid repeating play calls and giving away indicators. It’s not working.

”In the case of some of our struggles, it has just been our execution,” Pederson said. ”How we start games, that’s where the urgency, I think, coaches, players, everybody involved really needs to sort of heighten, so that we can stay on the field and go down and score points.”