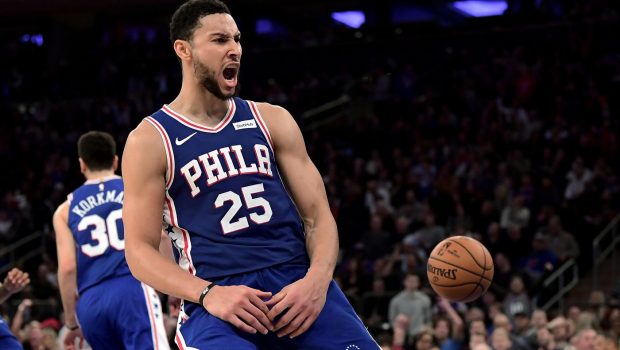 FOLLOW THE MONEY: SIXERS SIMMONS IS BACK — PAY ME OR TRADE ME!

ESPN’s Adrian Wojnarowski reports that Sixers guard Ben Simmons came back to the Wells Fargo Center last night — surprising the team that had expected him later in the week.

As the Sixers neared the tip of a 115-104 preseason victory over the Brooklyn Nets, Simmons — fresh off a flight from Los Angeles — entered the arena to take a COVID-19 test and start the process of returning to a franchise from which he has requested a trade, Woj reported:

What comes next is unclear, but the Sixers are desperate to restart communication with the three-time All-Star who hasn’t had a direct conversation with the front office or coach Doc Rivers since a late August meeting in which he reiterated his desire for a trade.

Why return now? Simmons is described as wanting to prove a point, and knowing he had done so with something that almost never happens in the NBA: sitting out training camp, costing himself nearly $1 million in lost salary and fines, and delivering an unmistakable message that he wanted a trade out of Philadelphia. The Sixers scoured the league but never came close to finding a deal that returned them the kind of elite player they’d want in exchange for Simmons, sources said. The trade market can shift quickly once the regular season gets underway — and more players become eligible to be moved on Dec. 15 — but the Sixers have no traction on a trade now, sources said.

There are expected to be conversations on how much of that money could be returned to Simmons should he reintegrate into the Sixers and return for the season, but it’s currently unclear whether Simmons’ intentions are to merely report to team or truly rejoin the team. Simmons has four years and $147 million left on his contract.

Simmons is expected to meet with the organization’s leadership starting Tuesday at the team’s practice facility, sources said. That will be telltale for the organization to begin to discover whether there’s an opening to convince Simmons that a reconciliation is possible — or whether Simmons’ return is simply what’s needed to get the kind of trade that the Sixers want to stay contenders around All-NBA center Joel Embiid.