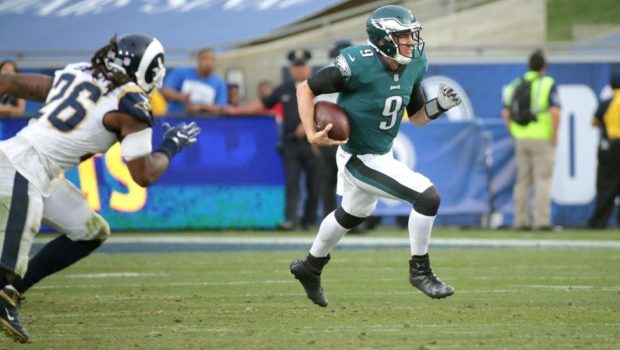 FOLES FOR WENTZ: TAKING A FANTASY FLIER ON EAGLES’ QUARTERBACK!

In Week 15 of 2013, the Eagles’ Nick Foles threw for 428 yards and three touchdowns against the Vikings.

It was one of his best performances in an unlikely breakout season in which he threw for 27 touchdowns and only two interceptions in 10 games as the Eagles’ starting quarterback.

You probably haven’t had Foles on your fantasy radar since he left the Eagles after the 2014 season, given that he has thrown for only 10 touchdowns (and 10 interceptions) in the 12 games he has started since then.

But if you’re a Carson Wentz owner who has a big hole to fill at quarterback, Foles might not be a bad choice.

Foles was dreadful in his time away from the Eagles. But the offensive schemes in St. Louis and Kansas City did not suit him, and he now has a stellar supporting cast around him, both offensively and defensively.

Foles could be surprisingly effective, especially against the terrible Giants’ defense. Foles is an interesting option for Wentz owners and a solid start in two-quarterback leagues.