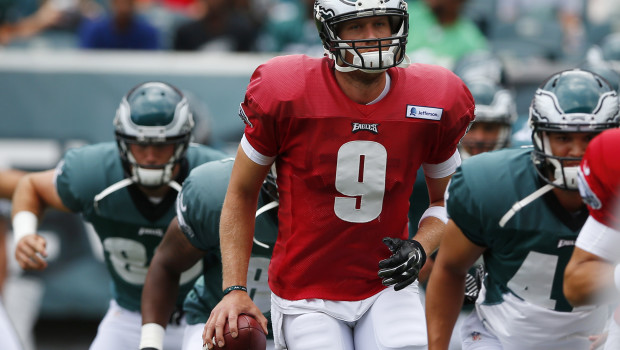 Left tackle Jason Peters and left guard Evan Mathis — selected to the Pro Bowl last season — combined with running back LeSean McCoy help make the Eagles the No. 1 rushing team in the NFL.

But the Birds gave up 46 sacks, eighth most in the league and the most by a playoff team. They finished 31st in sacks allowed per pass play.

The line wasn’t to blame for all of the sacks.

For all the impressive passing numbers quarterback Nick Foles put up last year, he had a tendency to hang on to the ball a little too long. The only quarterback in the league who held the ball longer last season was the Seattle Seahawks’ Russell Wilson, who was sacked 44 times in 407 pass attempts. Foles, who started just 10 games, was sacked 28 times in 317 attempts.

Foles preferred taking a sack to risking an interception. The strategy worked out pretty well for him. He threw just two interceptions the entire season and finished with the third lowest interception percentage in league history.

But he wants to do a better job of getting the ball out earlier this season and avoiding some of those sacks.

“This year, I really want to not take as many sacks, get rid of the ball faster, dump it down to the back earlier,” Foles said. “That’s something I’ll continue to work on the next few weeks (of training camp and the preseason).”

That doesn’t mean Foles plans to be reckless with the football. He knows he’ll almost certainly throw more than two interceptions this season, but he wants to keep the number low.

“There’s times I could have gotten the ball out, but I held it a little long,” he said. “There’s some times when there’s no one open and you’ve just got to eat it because if you throw it out there, a bad play can happen, and a guy can pick it, take it the other way. So sacks do happen.”