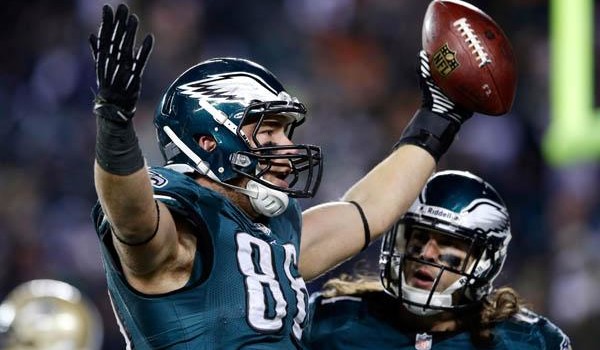 FOLES AND ERTZ WILL TORCH JAGUARS IN FANTASY AND FOR REAL

Matt Ryan (ATL) vs. New Orleans — One would expect the Falcons to be forced to rely on Ryan and the passing game to keep pace with the Saints’ high-powered offense. We expect Ryan to benefit greatly this season from the return of his favorite target, Julio Jones.

Nick Foles (PHI) vs. Jacksonville — A Jaguars secondary that surrendered the 10th most fantasy points to opposing wideouts in 2013 did not do much this off-season to remedy that. All eyes will be on Foles to see if he can come anywhere close to his league-best 25.3 fantasy points per game average from Weeks 9 to 17 last season.

Colin Kaepernick (SF) vs. Dallas — Fantasy’s second best quarterback matchup of 2013 will be banking on better years from the starting cornerbacks Brandon Carr and Morris Claiborne, as well as better results from a new defensive scheme. But until we see improvements, Dallas has to be viewed as a very favorable matchup for opposing quarterbacks.

Derek Carr (OAK) vs. Jets — Those who play in two-quarterback leagues take note: The Jets’ secondary looked like a train wreck with the rookie Dexter McDougle on injured reserve, Dimitri Patterson self-destructing in camp and Dee Milliner on the shelf with a bum ankle. Carr torched the defending Super Bowl champion Seahawks for 143 yards and 3 touchdowns in the third game of the preseason, winning the starting job over Matt Schaub.

Arian Foster (HOU) vs. Washington — A unit that allowed the fourth most fantasy points to opposing runners in 2013 will now be relying on Keenan Robinson to fill the retired London Fletcher’s shoes. Robinson missed five games in 2012 and all of 2013 because of torn pecs and will need to shake off the rust. Foster says he is healthy and ready to go.

Frank Gore (SF) vs. Dallas — Last season’s 27th ranked run defense (4.7 yards allowed per carry) gets even worse as DeMarcus Ware, Jason Hatcher and Sean Lee will not be wearing stars in 2014. Gore is still the main back for the 49ers, at least until the 31-year-old potentially runs into injury problems.

Shane Vereen (NE) vs. Miami — Fantasy’s 11th best running back fantasy matchup in 2013 received no significant help this off-season. The Dolphins have a major need at inside linebacker and it is hard to imagine the fifth-round pick Jordan Tripp filling that need in his first season. Vereen clearly has the most fantasy value of the Patriots’ backs, especially in points per reception leagues.

Mark Ingram (NO) vs. Atlanta — The Falcons’ allowed the ninth most rushing TDs (11) and the ninth most fantasy points (20) to opposing rushers in 2013. Thanks to an impressive preseason, Ingram has emerged as the lead back for the Saints.

Andre Johnson (HOU) vs. Washington — Johnson will take on DeAngelo Hall and the underwhelming Redskins secondary, which allowed an average of 11.8 standard fantasy points to opposing WR1 receivers last season. The 33-year-old is still the top target in Houston and, barring an injury, should be one of the top P.P.R. receivers again.

Marques Colston (NO) vs. Atlanta — The Falcons’ second-year player Rob Alford, who beat out Asante Samuel for the starting left corner position this off-season, will give up 6 inches, 40 pounds and 7 years of N.F.L. experience to the veteran receiver, who claims he is the healthiest he has been in over two years.

Julian Edelman (NE) vs. Miami —He should mostly avoid Miami’s top corner, Brent Grimes, by lining up from the slot. He exposed the Dolphins’ secondary in Week 15 last season with 13 catches, 139 yards and a score. Even if Rob Gronkowski plays in Week 1, and you’re worried he will steal Edelman’s targets, he is likely to be on a limited snap count.

Michael Crabtree (SF) vs. Dallas — The Cowboys allowed the sixth most points to receivers last year, and Carr’s weak play was a big reason. He was ranked 65th of 110 in coverage by Pro Football Focus last season, and is likely to cover Crabtree on Sunday.

Zach Ertz (PHI) vs. Jacksonville — The Jaguars were consistently weak against tight ends in 2013, allowing the third most fantasy points to the position. Ertz could emerge as one of Foles’s favorite red zone targets this season.

Travis Kelce (KC) vs. Tennessee — He is the only viable offensive weapon for the Chiefs, besides Jamaal Charles, with the top receiver Dwayne Bowe serving a one-game suspension.

Antonio Gates (SD) vs. Arizona — No team was more generous to opposing tight ends in 2013 than the Cardinals, yielding an eye-popping 1,156 yards and 16 TDs over 16 games.