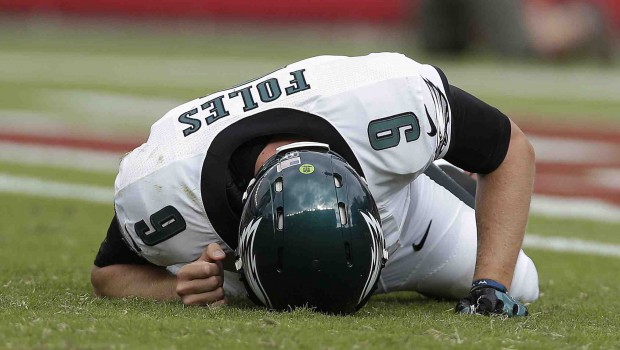 Philly is known as a tough place for pro athletes, what with the relentless carping for the lame-ass media and the fans.

So, thin-skinned types like Cole Hamels and Donovan McNabb had a hard time here while thicker-skinned guys like Charles Barkley did just fine.

But what about delicate former-Eagle quarterback Nick Foles?

The Inky’s Jeff McLane called in to Anthony Gargano’s show yesterday on 97.5 The Fanatic to talk Sam Bradford, his injury, and his attitude. Along the way, he mentioned that in the past Nick Foles let the criticism from fans and the media get to him last year. Gargano asked him to elaborate:

Nick wasn’t really comfortable in that [franchise QB] role. And I think there wasn’t much written about that and we’ve learned more about that since Nick has been gone …

It really got to him, some of the criticism here in Philadelphia about his play last year. I heard from a couple of players that he’d get down … I understood that he’d let it get to him. I think that had to do with the decision to part with him … they felt like Nick wasn’t the guy for this team and this city.”