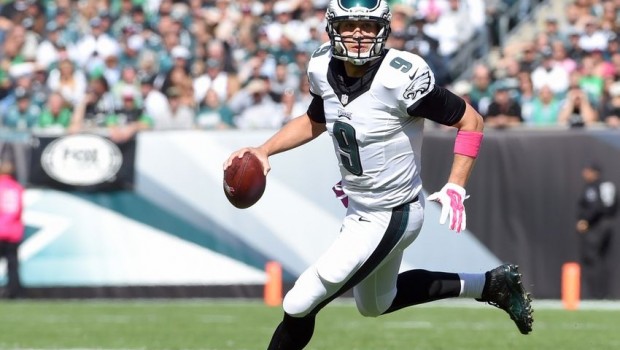 FOLES A 'FRANCHISE' QB? PERHAPS, BUT MAYBE NOT FOR THE EAGLES

Radio talk show dopes have developed a meme this season:

Nick Foles is a not a “franchise” quarterback for the Eagles.

By “franchise” they mean deserving of Tom Brady money when his contract ends. Or Drew Brees money.

No one expected the Eagles quarterback to throw 27 touchdown passes and two interceptions in the regular season last year. But that’s what he did in coach Chip Kelly’s high-octane system after taking over from Michael Vick and starting Philly’s final 11 games, including a wild-card playoff loss to New Orleans.

This season not so much.

The Eagles lost a battle with Arizona 24-20 on Sunday, and the difference was turnover.

Unfortunately for the Eagles, like they have throughout this season, those turnovers came from Foles.

Foles had two interceptions, both coming with the quarterback having plenty of time to deliver a clean pass.

After struggling in the first half, Foles came through with one of this best throws since he became the starting quarterback. With the Eagles trailing 14-10, Foles put the ball right over the fingertips of a Cardinals defender and into the hands of wide receiver Jeremy Maclin, who caught it in stride for a 54-yard touchdown.

On his interception in the first half, Foles seemed to have a wide-open touchdown to rookie receiver Josh Huff. Foles showed poor mechanics on the pass, and he paid for it, lofting it off of his back foot for the end-zone interception. Cardinals cornerback Antonio Cromartie made a nice pay on the interception, but if Foles delivers an even average pass, there is no play to be made. The turnover in the red zone proved to be the difference in a close loss.

Foles started out slowly, hitting a few short passes. If that was by design, it was a wise decision, because he struggled throwing it deep, aside from the touchdown pass to Maclin.

Toward the end of the second half, Foles whipped the ball down the field to receiver Riley Cooper. The pass was a poor decision, as he threw it across his body on the run into triple coverage. Foles was lucky it wasn’t intercepted.

Foles’ second interception of the game came in the fourth quarter with the game in the balance. With plenty of time, Foles threw the ball behind Cooper on a crossing route and right into Cromartie’s hands again. The Cardinals would drive down the field and tie the game on a field goal on the next drive.

One bright moment for Foles was when he kept his eyes downfield on a broken play, and hit Cooper 40-yards down the field for a long completion. A lot of quarterbacks wouldn’t have made that pass, instead opting to run. Foles consistently keeps his eyes down the field, and it showed on that play.

Foles didn’t do much on the team’s final drive, as both of his fade passes in the corner of the end zone in the fourth quarter were too high and uncatchable.