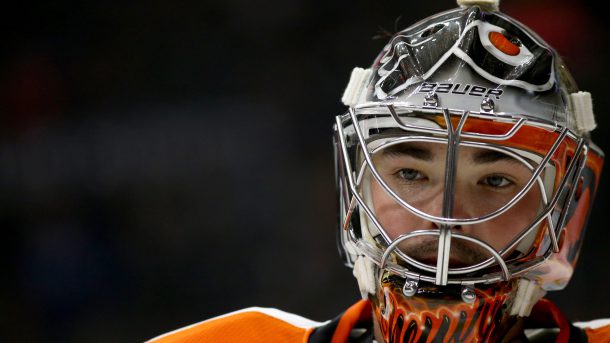 FLYERS’ NEUVIRTH HOSPITALIZED AFTER COLLAPSING ON THE ICE!

Flyers goalie Michal Neuvirth was awake and alert and was taken to Pennsylvania Hospital after collapsing in his crease early in last night’s game against the New Jersey Devils, general manager Ron Hextall said.

Neuvirth, 29, was awaiting a faceoff at the far end of the ice about seven-and-a-half minutes into the game when he fell backward and landed on his back. Flyers athletic trainer Jim McCrossin quickly ran onto the ice to attend to him and was joined by three other team doctors.

Neuvirth appeared to be unconscious for a brief time, but he began moving his arms and legs and sat up in his crease before being placed on a stretcher and carted off the ice.

“We sent him to the hospital for precautionary reasons, and everything so far has been good,” Hextall said, adding that Neuvirth will not make the team’s trip to New York for Sunday tonight’s game against the Rangers.

Neuvirth was making his 28th appearance of the season and first since March 25. He stopped six shots before the incident and did not appear to have any unusual contact in the crease prior to his collapse. The Flyers were leading 1-0 at the time.