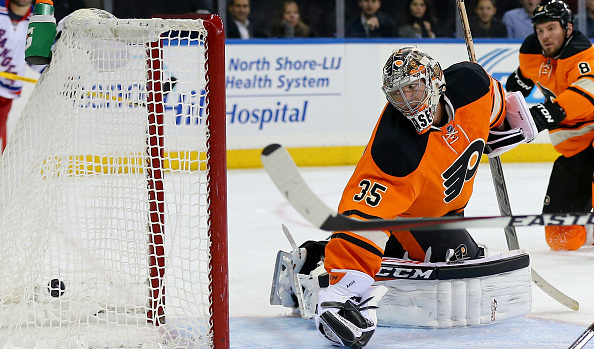 The Flyers seemingly were uninspired by their captain, Claude Giroux, limo-ing to Manhattan at the last minute to play even though team said he had an injury and was out for two games.

Perhaps they were more inspired by their general manager, Ron Hextall, who flipped out on them last night after they were blanked by the New York Rangers at Madison Square Garden.

Hextall apparently was so dissatisfied that he could be heard laying into the team from the team’s dressing room, screaming, “That’s f——embarrassing,” among other choice words.

Hextall addressed the media after the tirade and said he could neither confirm nor deny that it was him screaming according to Greg Wyshynski of Yahoo Sports.

The general manager was known for his fiery competiveness as a player, so it shouldn’t be surprising that he’d be disgusted with the game Philly played Wednesday. The question now is how much of that frustration carries over into the decision-making for the Flyers going forward.

Perhaps something will change sooner than later as the Flyers are now 7-8-2 and remain in sixth place in the Metropolitan Division. They are just one point ahead of the Carolina Hurricanes and three points ahead of the last-place Columbus Blue Jackets.

Getting shut out in a game as big as Wednesday night’s against a longtime rival and the same club that ousted Philadelphia from the playoffs last year is going to be a tough pill to swallow. Judging by the reaction from Hextall, it may have even been rock bottom.

Hextall later commented “I’m not going to confirm or deny” the yelling,” but he admits being disgusted with the Flyers’ play in a 2-0 loss to the Rangersat Madison Square Garden that was way uglier than the final score indicated.

“Yeah, that bothered me a lot,” Hextall said after the Flyers’ ninth regular-season loss in a row at the Garden. “We didn’t come out hungry enough and we didn’t play well. We’ve got to be a lot better than that.”

“From the start of the game, we didn’t skate, didn’t compete,” the coach said. “You’ve got to play hard in this league and we didn’t do that.”

That’s why Hextall undressed his players.

“He’s probably not very happy after that performance, so I don’t blame him,” Berube said. “Tonight for me it’s not showing up to play. That’s really disappointing. Big game. Rangers. We’ve obviously had a tough time in the rink and not coming out and showing anything.”

This is three losses in a row for the Flyers, who had 13 giveaways and were shut out by Rangers backup goalie Cam Talbot.

Steve Mason (photo above) was excellent in goal, Giroux looked pretty good in a season-high 25:45 of ice time after surprisingly not sitting out the game due to his ankle injury, but there weren’t many other positives.

“Mase stood on his head for 60 minutes and played awesome for us, and unfortunately we didn’t support him,” right wing Wayne Simmonds said. “We didn’t play a tough brand of hockey. We didn’t do the things we were supposed to do. We were turning pucks over in the neutral zone.”

“If you don’t play, you should have more energy,” right wing Jakub Voracek said after his career-best 10-game point streak ended. “That’s what I think.”

The Flyers were so bad that Mason took a shoulder to the head late in the second period from teammate Braydon Coburn, who got careless circling his net.

Mason shook it off after being down on his hands and knees for a couple of minutes, but the Flyers did lose defenseman Michael Del Zotto to lower-body injury on a third-period collision with Rangers defenseman Dan Girardi.

Del Zotto’s status for the Flyers’ game Thursday night against the Minnesota Wild at Wells Fargo Center is questionable.

The other Flyers hope to actually show up … unlike Wednesday night at the Garden.

“The first two periods we weren’t ready to skate,” Voracek said. “In the second period we lost about 80 percent of the battles. … You’re not going to win games like that. It’s simple.”