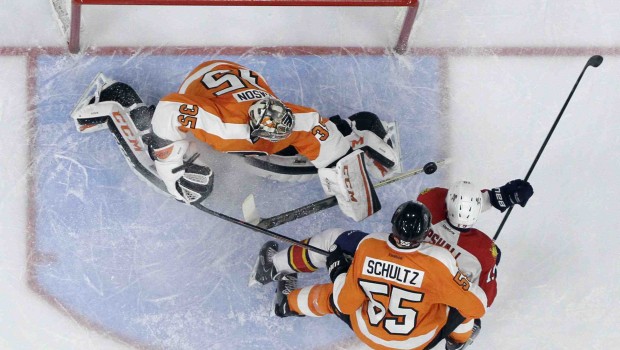 FLYERS ‘SHOULD HAVE WON THE GAME IN OVERTIME’

The Flyers found another way to lose a shootout last night:

The Panthers’ victory came two days after their NHL-record 20-round shootout win Tuesday against the Washington Capitals.

The Flyers’ Sean Couturier had a chance to extend the shootout, but on his attempt the puck rolled off his stick before he could get a shot off.

Jakub Voracek scored for the Flyers and also had their only goal of the shootout. Mason made 31 saves in regulation and overtime, and then denied four of six Panthers shooters.

“We got to find a way to win them,” Mason said. “We’re not scoring enough in it, we’re not stopping enough. Tonight we had two opportunities to win it and we couldn’t. We have to find ways to bear down in these things. That’s five shootouts we’ve lost this year … that’s five points that could have put us in the [Stanley Cup] Playoffs; there’s your difference.”

The win boosted the Panthers into the second wild-card spot in the Eastern Conference.

After a scoreless third period, the Flyers had the better of the play in overtime. They outshot the Panthers 4-2, but Luongo made three key saves to keep Florida in the game. He got a piece of Mark Streit‘s shot with his glove with 1:37 left and gloved a Matt Read slap shot with 41.2 seconds remaining. Then with 14.3 seconds remaining, he did the splits to glove aside Andrew MacDonald‘s shot off a 4-on-2 Philly rush.

“They probably should have won the game in overtime,” Panthers coach Gerard Gallant said.

The points are important to Philly as well, and the Flyers felt they let one get away Thursday due to a lack of intensity at different parts of the game, especially the first period.

“Some good things and some bad things [in the game],” Mason said. “Overall I think we just have to up the intensity. We got to create more. … Guys have to step up; they can’t just look for a couple of guys to provide the spurts. It’s got to be everybody.”

The Flyers finished their four-game homestand 2-1-1, but they will take a bit of a sour taste with them as they start an eight-game road trip Saturday against the Toronto Maple Leafs. The Flyers beat the New Jersey Devils and Carolina Hurricanes in the first two of the homestand, but picked up one point in their final two, against the Tampa Bay Lighting and the Panthers.