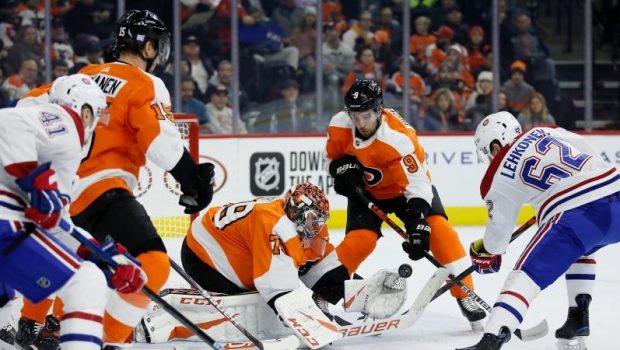 Sean Couturier scored 55 seconds into overtime and the Flyers beat the Montreal Canadiens 3-2.

Philippe Myers and James van Riemsdyk each added one goal for Philly, which went 0-for-6 on the power play but found a way to win.

Ben Chiarot and Shea Weber scored one goal apiece for the Canadiens, who rallied from a 2-0 deficit before falling short in overtime.

Price was solid for most of the game with 40 saves on 43 shots.

The Flyers stayed aggressive and the forechecking paid off as Myers fired a wrist shot from the point for a 1-0 lead at 13:51 of the first period, his first goal of the season.

Less than two minutes later, Price went sprawling to the ice and made a spectacular save against Couturier.

Brendan Gallagher, who led the Canadiens in goals scored each of the last two seasons, was active throughout the first 20 minutes and he registered three shots on goal, tied for the team lead.

The Flyers went ahead 2-0 just 49 seconds into the second when van Riemsdyk corralled a loose puck in front and scored his fourth goal of the season.

Price kept the Canadiens within two goals by helping to fend off a pair of power plays, including a 12-second two-man advantage.

Montreal then closed within 2-1 at 13:44 of the second when Chiarot took advantage of a bouncing puck off Hart and sent it into the net.

Defenseman Shayne Gostisbehere nearly scored at the second period buzzer as his shot was stopped by Price and the puck then trickled through the crease. The Flyers took a 2-1 advantage after two periods.

The Canadiens tied the game at 2-2 4:05 into the third when Weber scored following a Flyers turnover in its own zone.