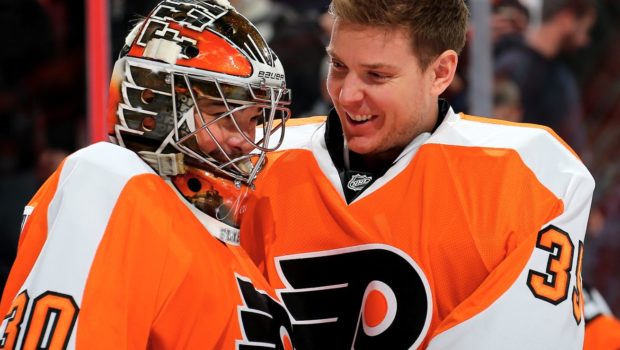 FLYERS WILL LIKELY TRADE ONE OF THEIR GOALIES BY MARCH 1!

But not for Flyers goalies Steve Mason and Michal Neuvirth.

They both don’t have contracts for next season.

In 2014 he was dealt from Washington to Buffalo and 2015 from Buffalo to the New York Islanders. The Flyers inked him to a two-year contract in the summer of 2015 that will expire June 30.

He could be on the move again, but these days the Flyers think he’s their best chance at a win. At least that’s what can be gathered by the frequency of his play. Meanwhile Mason has played in one game since Feb. 2.

Is Neuvirth trade bait? Still auditioning for a new contract with the Flyers? Does general manager Ron Hextall already have a plan for next year that involves neither goalie on the current roster?

“Sometimes you have questions like that in the back of your mind,” Neuvirth said. “Obviously it’s not ideal, but it is what it is.”

Hextall has said he doesn’t want to address next year’s goalie situation until the offseason. In October that meant not negotiating with either potential incumbent. These days it might mean moving on altogether. It’s tough to tell…even for the players.