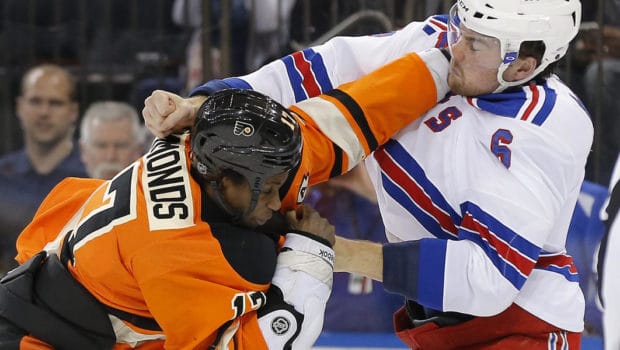 Flyers all-star Wayne Simmonds has a reputation that precedes himself.

Simmonds stands his ground on the ice.

“He’s a hard guy to play against,” Anaheim Ducks coach Randy Carlyle said. “He stands up for his teammates. He’s grown into one of the top, premier power forwards in the game.”

Simmonds, 28, may be the most unlikely All-Star of the group.

When he was traded to Philly from Los Angeles in 2011, Simmonds was a checking forward who had averaged 13 goals over three seasons with the Kings. He had only three power-play goals, going an entire season without one.

But with the Flyers, Simmonds has evolved into an asset in all situations, particularly the power play, where he has become one of the most formidable net-front presences in the league.

He has been remarkably consistent, averaging 29 goals in his first four full seasons as a Flyer. Simmonds already has 21 goals this season to lead the Flyers through 50 games. His 69 power-play goals since arriving in Philly are second only to Washington Capitals wing Alex Ovechkin over that span. He is also on a pace to accumulate more than 100 penalty minutes for the fifth time.

Simmonds displays a surly side.

Flyers defenseman Michael Del Zotto said Simmonds would “fight anyone.” Last season Subban, then with the Montreal Canadiens, was captured on video telling his teammate Max Pacioretty, “No, you cannot fight Wayne Simmonds.”