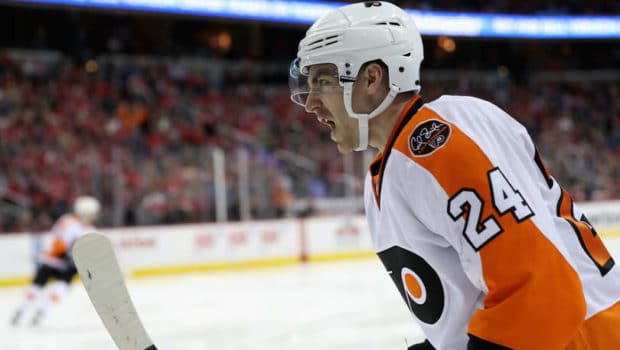 Six-year vet Matt Read was placed on waivers on Monday. If he clears, he would be assigned to AHL Lehigh Valley.

That would trim the Flyers’ final roster from 24 players to the mandated 23 players.

The 31-year-old Read, who signed with the Flyers as a college free agent out of Bemidji State prior to the 2011-12 season, has scored 86 goals and added 100 assists for 186 points in 418 games in an orange and black sweater. He also has four goals and four assists in 24 career playoff games.

Things started to go downhill in 2014-15 for Read. Known at the time for his speed, he suffered a high-ankle sprain at the start of the season and never truly rediscovered his burst. In the last three seasons, starting with 2014-15, Read has scored just 29 goals and found himself as a healthy scratch on more than one occasion.

If he goes unclaimed, Read would be assigned to Lehigh Valley, where he would provide the Flyers $1.025 million in cap relief. If that’s the case, he still would count for $2.6 million on the Flyers’ cap. It would be similar to the situation with Andrew MacDonald two seasons ago. MacDonald was eventually called up later in the season, and Read certainly could be this season.