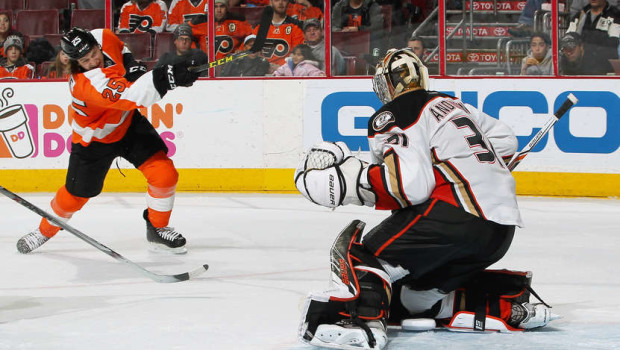 The Flyers knew they were in the soup after last night’s first period, and they lost a chance to gain in their push to the playoffs

Rickard Rakell recorded his second two-goal game of the season as the Anaheim Ducks to a 4-1 win against the Flyers at the Wells last night.

And the Flyers are stuck at 55 points, seven behind the Pittsburgh Penguins for the last wild card playoff spot in the Eastern conference.

The Flyers, who were coming off back-to-back 3-2 losses to the New York Rangers on Saturday, in a shootout, and the Washington Capitals on Sunday, lost the game in the first 20 minutes.

“It’s frustrating, especially at home, to come out flat like this,” captain Claude Giroux said. “We lost the game in the first period.”

It was the Flyers’ fifth game in eight days since the All-Star break, and they have three games in four nights starting Thursday at home against the Buffalo Sabres.

The Flyers scored on the power play when Wayne Simmonds chipped the rebound of Giroux’s shot off Ducks defenseman Cam Fowler and past Andersen for his 19th goal with 6:05 left in the third period.

Shayne Gostisbehere had an assist on Simmonds’ goal. He has a nine-game point streak, tying Kevin Shattenkirk of the St. Louis Blues for the longest by an NHL rookie defensemen since the start of the 2010-11 season.

The Ducks lost 6-2 at the Pittsburgh Penguins on Monday, and Rakell was minus-4, the worst rating of his NHL career.

Frederik Andersen made 28 saves for the Ducks (26-19-7). Chris Stewart scored on a penalty shot, Andrew Cogliano had an empty-net goal, and Corey Perry and Ryan Getzlaf each had two assists.

Rakell opened the scoring when he banged in the rebound of Perry’s redirection of a Sami Vatanen shot for a power-play goal at 10:27 of the first period. Then, at 15:08 of the first, he took a pass from Perry, moved in off the wall on the left side, used Flyers defenseman Michael Del Zotto as a screen, and shot the puck under Mason’s right pad for his 13th goal.

Wayne Simmonds scored on the power play, and Steve Mason made 22 saves for the Flyers (23-20-9), who were dominated early in losing their third straight (0-2-1).

The Ducks had 12 of the first 13 shots and outshot the Flyers 15-5 in the first period.

Despite the four-goal loss to Pittsburgh, Anaheim coach Bruce Boudreau used the same 18 skaters Tuesday that he used Monday; he said before the game that he wanted to give the players a chance to make amends for their effort against the Penguins.

“I couldn’t have written it up as good as that,” Boudreau said. “I thought our first period, especially the first 14 or 15 minutes of the first period, was pretty dominating. It shows the guys were a little ticked off by their effort last night and they wanted to atone for it.”

The Ducks killed another Flyers power play after Kevin Bieksa was called for covering the puck with his hand with 3:47 remaining in the third, and then Cogliano scored into the empty net with 52.0 seconds left.

The Anaheim penalty kill, which is ranked first in the League, was 6-for-7 against Philadelphia.

“Our [penalty kill] has been great all year,” Getzlaf said. “Coming off last year, we got a lot of the same guys killing together, which helps. You get that chemistry going together where you know what each other is going to do, you can read off each other, and guys are buying in. They’re blocking shots and doing the things that we need to do, and we’ve having great goaltending.”

“They were the better team tonight for about 50 minutes,” Voracek said. “I took the three penalties. … It happens, but I’m [angry] about that third one because we were on a four-minute power play.”

Stewart’s penalty-shot goal at 12:48 of the second period gave the Ducks a 3-0 lead. Getzlaf sprung him on a breakaway, and Flyers defenseman Nick Schultz was called for hooking Stewart.

On his penalty shot, Stewart skated up the middle and snapped a wrist shot from the slot between Mason’s pads. It was his eighth goal of the season but first in 15 games.

It was the Ducks’ first penalty-shot goal since Ryan Kesler scored against Buffalo Sabres goaltender Michal Neuvirth on Oct. 13, 2014; Neuvirth now plays for the Flyers.

It was the first penalty-shot goal allowed by Philadelphia since Jonathan Huberdeau of the Florida Panthers on Feb. 21, 2013.

“Used to get some breakaways in this league back in the day,” Stewart said. “Once the big man gets going … tried to turn the jets on there, got a little hook and got the benefit of the doubt for the penalty shot.”

The Ducks will try to keep the momentum going Thursday against the Columbus Blue Jackets, the third of their seven-game road trip.

“As the season has gone on, I think we’ve become a better team and a more resilient team,” Boudreau said. “… Now you’re under 30 games left. I remember at the beginning of the season saying, ‘We got 70 games left; what’s everyone worried about?’ But now there’s under 30, and we’re still in a dogfight. It’s one of those things we have to keep the foot on the gas.”