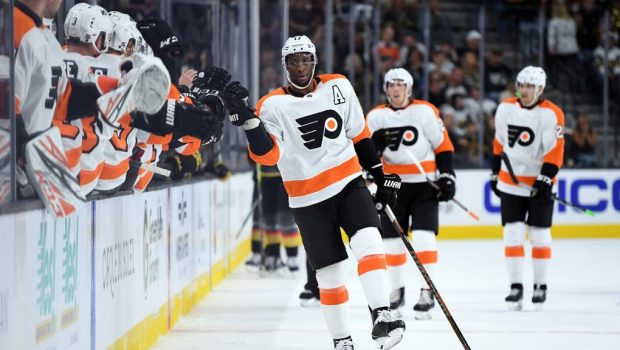 FLYERS WANT A NO. 1 PICK AND A PROSPECT FOR WAYNE SIMMONDS!

Simmonds, 30, is second among Flyers goal scorers after Wednesday night’s 4-3 win over the Bruins (his 15 trailing Sean Couturier’s 19) and he is typically good for 25 goals and 55 points per season.

His long-term contract set to expire June 30, he also is on target to become an unrestricted free agent July 1.

The Bruins are desperate to find David Krejci an upgrade at wing, be it left or right, and Simmonds is a 6-2-inch righthanded shot who is comfortable on both sides. Given his straight-ahead style, he likely would line up on the right side (as Rick Nash did a year ago) and DeBrusk on the left side.

The cost to acquire Simmonds: higher than any Bruins fan would want.

The Flyers will want a first-round pick in the deal, with a prospect or two added. The Bruins have the prospects, more than they’ve had in years, but GM Don Sweeney likely would find it impossible to part with the first rounder again after surrendering one a year ago in the Nash deal.