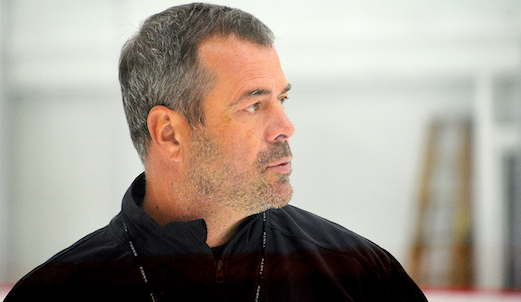 FLYERS VIGNEAULT: CLEAN UP IN AISLE 4 FOR HIS RACIALLY TIN EAR!

Flyers coach Alain Vigneault made some comments last Wednesday that many folks thought were racially insensitive after the NBA decided to cancel playoff games because of the murder shooting of Jacob Blake in Kenosha, Wis.

So, before the Flyers played the Isles in game 3 last night, Vigneault played CLEAN-UP IN AISLE 4.

Here was his message:

After our last game against the New York Islanders, I was asked about the situation in the NBA. We had played a 3 o’clock game, I didn’t know what was going on, so I didn’t comment. We got back that night at 6:15 at the hotel, I picked up some food, had a martini and went to my room to work. We were playing in less than 24 hours, I worked late into the night, got up very early the next morning, continued to work. I conducted my 10:30 to 11:45 coaches meeting, at 11:45 I went to get COVID tested, at 12 o’clock, I was back here for a press conference.

I never bothered to ask or check with anyone what was going on in the world or the NBA. I am guilty of that. I was totally focused on our next game. Like I said at the 12 o’clock press conference, I am for equality, I am for social justice. After that press conference, I went to our pregame meal. I left there around 12:35. And as I walked out, I saw players from the four teams that are in the bubble talking. That was my first indication that something was going on. Shortly, very shortly after that, I received a text from one of my players telling me that they were not playing that evening.

I am guilty of not checking up on what was going on in the world and in the NBA. But, I am a good person. I believe in equality, I believe in social justice, I want to be a part of the solution, I want to help society in any way I can.

We all have our part to do moving forward to help society fix its issues. Maybe we can all start by being good to one another. Society is like a big team; everyone has a role to play. If we work together and do our roles, I am convinced that we can fix society’s issues.

I want to thank everyone for being here. Everyone stay safe and that concludes today’s press conference. Thank you, thanks guys, stay safe.