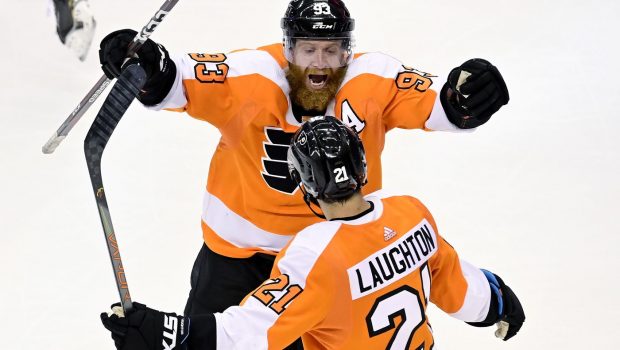 The Flyers tasted success in the bubble this season but ultimately left without any hardware. Losing to the New York Islanders in the Second Round was a kick in the gut for a team projected to do well this past season.

While the Flyers failed to reach the Eastern Conference Finals, they are still one of the top teams in the East and are projected once again to be a threat this season. Whether the season schedule is 82 games or drastically changed, the Flyers will be a team to watch in 2021.

Despite bowing out in the second round, there is no reason for the Flyers to make any radical changes. Tweaks to the roster and smaller moves may help Philly get over the hump next season, but right now the Flyers have a talented core ready to push the limits of their opposition in the NHL.

Arguably the heart and soul of the Flyers’ talented roster is Captain Claude Giroux. The 32-year-old was drafted by the Flyers in the first round out of Junior Hockey and has made an impact for the organization ever since touching the ice back in the mid-2000s. Giroux has seen and done it all with the team and in his professional career. The one thing missing from his trophy case is a Stanley Cup. He reached the pinnacle of professional hockey once in his career, ultimately losing to the Chicago Blackhawks on home ice. It still stings, but the current assembled roster has the talent, grit, and fortitude to reach the Stanley Cup.

These odds listed are better than potential Cup winners Washington Capitals (+1700) and the Dallas Stars (+1800). Philadelphia owns the same odds as teams that have competed and won the Cup recently as well. The Pittsburgh Penguins are listed at +1600 and although they are rivals to the beloved Flyers, it’s hard to discredit the Penguins’ success.

Anyone who follows hockey can tell you the top teams in the league. Some teams are cut from a different cloth than others but there are recurring themes with top organizations that help them stand out among the rest; especially concerning Stanley Cup odds.

The Tampa Bay Lightning are the defending Stanley Cup champions and their roster has similarities to the Flyers, which makes analysts and experts believe Philadelphia’s window to win is right now.

The Lightning have veterans on their roster that have seen success at the highest level. The Flyers are quite close in comparison, with leaders like Giroux, Jakub Voracek, Kevin Hayes and Sean Couturier.

Philly has young guns that are making a significant impact. Carter Hart (22), Ivan Provorov (23) and Travis Konecny (23) lead the way for the youth movement in the NHL and the Flyers’ dressing room.

And lastly, the Flyers are in the same boat as the Lightning with players that are only going to get better. The aforementioned young stars are producing at the highest level already, but then you have rookies ready to make the starting lineup and players in the AHL ready to make the jump to the big leagues.

While the Flyers didn’t reach their full potential this season, they are in a similar boat to Tampa Bay. Philadelphia has a myriad of talents that are deadly when they click. The Flyers’ current path is similar to the one the Lightning, Capitals and even the St. Louis Blues have taken.

Tampa Bay, Washington, and St.Louis are all teams that have fought tooth and nail every season to reach the holy grail and finally won the big prize in the NHL. It’s not tough to see that the Flyers could be walking down the same path as these former Stanley Cup champions.

It may be difficult to acknowledge how close the Flyers are to reaching the Stanley Cup (and potentially winning it), but the Flyers-faithful know that this group is special. Whether it’s this season or down the line, there is a winning formula in Philadelphia.

Going up and down Philly’s roster, you can see how much talent they have.

The Flyers’ organization is deep, which makes them a prime candidate for Philly to hoist Lord Stanley. They don’t own the best odds to win the Stanley Cup but they are among the top teams in the league – could next season be their year?