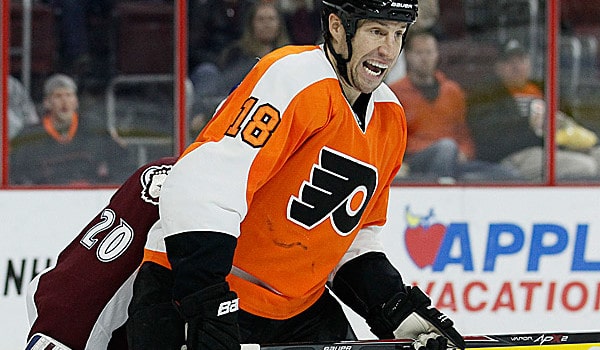 Like a lot of Flyers who are in training camp under new coach Dave Hakstol, R. J. Umberger is delighted to have escaped hard-ass coach Craig Berube.

Umberger had numerous physical issue last season led to a season-ending surgery on March 19 — but he’s still critical of Berube for not going over systems enough during the Flyers’ unsuccessful 2014-15 season. In addition, he feels his old coach wasn’t tough enough on players.

“There were reasons why we didn’t make the playoffs last year,” Umberger told NJ.com. “Maybe not hammering down the (systems) details over and over, and if he’d been a little stricter, were among (the reasons).”

Systems generally are used for even-strength play and penalty killing, two areas in which the Flyers really struggled last season.

“Structure wise, I think there were some question marks within our game and our system,” Umberger said. “I don’t think a lot of us were on the same page. From line to line, I don’t think we knew our structure as well as we should have.

“I’ve had coaches in the past that reemphasized it over and over throughout the year. No matter how much times you do it, you keep going over it because it only takes one or two games to get off on it. You need to be reminded. That’s something’s that’s just common and I don’t think we did that much last year. We didn’t revisit our structure and our systems a lot.”

Umberger’s heard from players who played college hockey for Hakstol at North Dakota that his complaint of Berube won’t be an issue this season.

Umberger says Hakstol already has players’ respect because he’d been so successful at North Dakota.

“There’s no reason not to respect him and not to buy in,” Umberger said. “Everywhere he’s gone he’s had great success. People speak highly of him. He’s here and he’s our coach. We’ve got to give him our best.”