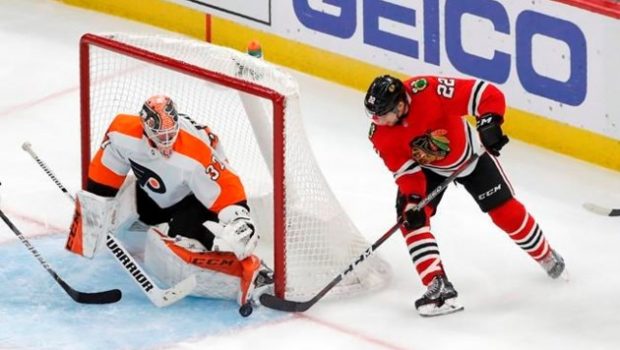 Kevin Hayes scored after he lost a goal because of an offsides challenge, and the Flyers beat the Blackhawks 4-1.

Brian Elliott made 23 saves in the Flyers’ first win in their fourth road game.

“It’s nice it all came together on the road,” Hayes said. “We’ve been playing good hockey. Even in some of the games we lost, we outplayed the other team.”

It looked as if Hayes scored the first goal 6:09 into the first, but the Blackhawks challenged the play and the call was overturned because Hayes was offsides. Joel Farabee’s first career goal was thrown out in the third because of another offsides challenge.

“There’s not a lot of kids in the NHL who are lucky enough to get their first NHL goal twice, so I think he’s pretty lucky on that side,” Claude Giroux cracked.

But there was no disputing Hayes’ breakaway 5:03 into the final period. He skated away from Chicago defenceman Brent Seabrook and beat Robin Lehner for his third of the season and a 3-1 lead.

First, Oskar Lindblom finished a 2-on-1 with Travis Konecny 13:05 into the first. It was Lindblom’s team-high fifth goal.

Giroux got his first of the season 59 seconds into the second. With fellow captain Jonathan Toews on his back, Giroux redirected Travis Sanheim’s pass into the net.

“You want to try to help the team win. Sometimes when it’s not going in you’ve got to do the little things right,” Giroux said. “Tonight I thought we played a really good game, especially in the second period.”

James Van Riemsdyk helped put it away when he got his first of the season 16:44 into the third.

“For everyone on our group, it was just a matter of time,” coach Alain Vigneault said. “If you stick with the process, do the right thing, sooner or later you’re going to get rewarded.”