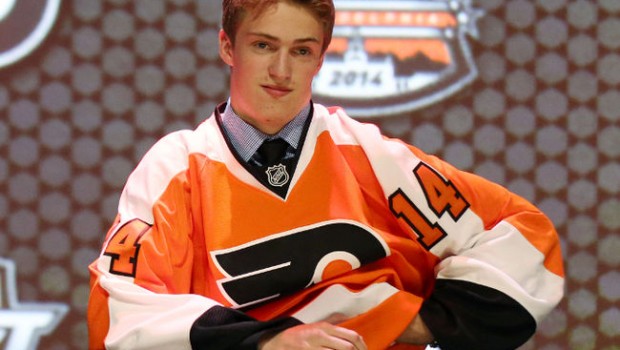 The Flyers’ 2014 first round pick was dominant in the Rangers’ 3-2 overtime win in Madison Square Garden that saw the Orange and Black fall to 1-1-3 in exo play. The teams play again tonight at the Wells Fargo Center.

In last night’s first period, Sanheim took a nice pass from Nolan Patrick and rocketed a perfect shot from the left circle past Henrik Lundqvist under the long-side crossbar with the teams playing four-on-four.

In the waning seconds of the second period, Sanheim pinched in deep, corralled a loose puck near the crease and slid the puck into the net for a 2-1 Flyers lead.

Sanheim was also quite strong on the defensive side of the puck. Twice, he was isolated in one-on-one situations on Rangers rushes and stopped the play cold. In the third period, the 6-foot-4 defenseman used his reach to knock a dangerous rebound to safety.

“[My confidence] is really high right now. Obviously, I don’t want it to get too high. I just have to try and keep an even keel here and finish up strong,” Sanheim told the team’s web site.