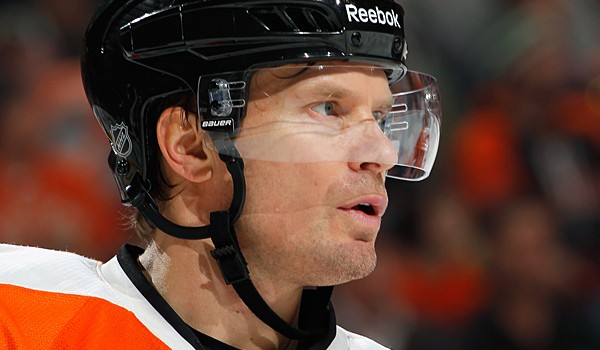 The big news at Flyers Skate Zone Friday was that Kimmo Timonen (photo above) was testing out his body after missing more than four months of this season due to blood clots.

The even bigger news was that Braydon Coburn skated on his repaired ankle.

If Coburn gets back to playing and shows he’s healthy, as NJ.com commented, he’ll have more trade value than Timonen because he’s signed through next season at a $4.5 million cap hit that is reasonable for a big-minutes blueliner.

Timonen, 39 and planning to retire after the season, probably will be able to fetch the Flyers a fourth-round draft pick in a trade, perhaps a conditional third rounder. His cap hit is $2 million for this season plus a possible $1 million for next season’s cap if he plays 20 games.

The Flyers should be able to get at least a second-round pick for Coburn, who turns 30 on Feb. 27.

The foot injuries have cost Coburn 21 games so far — 12 games the first time he was hurt, nine and counting this time.

When healthy, Coburn hasn’t been as good as he’s been in past seasons, either, especially during the Flyers’ penalty kill, which has been among the worst in the league all season. In 35 games, he has one goal, six points and is a minus-1.

But Coburn still will intrigue contenders looking for blueline help because of he’s a big man who is a very good skater.

Asked if he’s been thinking at all about the trade deadline, Coburn said, “Not really. I was just worried about getting better. There wasn’t really a lot of off time. A lot of workout in the gym. I’m just trying to do everything to get back.”

When Coburn gets back, he and Timonen could be together again … for a few games.

“Obviously, it would be exciting and cool and everything, but you don’t want to get too far ahead of yourself,” Coburn said.