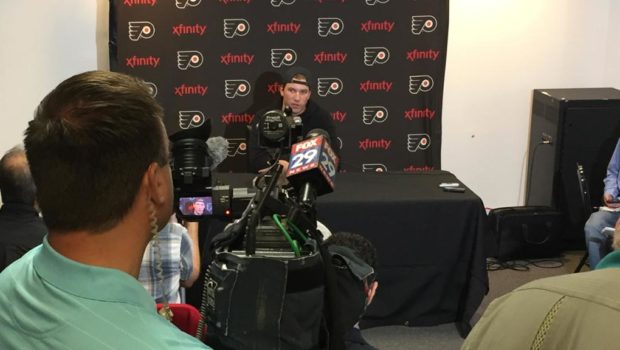 FLYERS’ TOP DRAFTEE PATRICK CAN ONLY SIT AND WATCH!

Welcome to the NHL, where secrets are kept better than they are in the CIA, and where injuries are often lied about or obfuscated — lower body could mean a broken leg or a sports hernia.

Which brings us to Nolan Patrick, the kid the Flyers took at No. 2 overall in last month’s draft.

That’s because he required a second surgery to repair a core muscle problem after the Flyers drafted him — he had another one last season.

Patrick spoke to the media yesterday in a press conference setting in Voorhees at the Flyers’ development camp, and he admitted that he wasn’t 100 percent when he did play for the Brandon Wheat Kings.

Patrick described his symptoms, he was anywhere from 60-75 percent but didn’t want to miss his entire draft year.

“Mostly sharp pains through skating,” said Patrick. “That is mostly what bothered me and my skating didn’t get to where it needed to be. It’s tough to explain, it is kinda like a sharp shooting pain through my lower stomach. I kind of have it on both sides for a while there, but one side was fixed and then I was having issues on that side again. When I came to see what the best options were to get done for that area and he said I needed to get it done, I just got it done right away and I am happy to move forward from there.”

Although he is restricted from the on-ice activity at camp, he doesn’t feel like it will hurt his chances of making the Flyers squad this fall.

“No I don’t think so at all,” added Patrick, who also said he will begin on-ice skating next week. “It is not an evaluation camp and they made that clear to us. We are working on skills and development and obviously I am going to put in a little more work than other players after coming back from an injury and I am ready to do that and catch up to the team.”