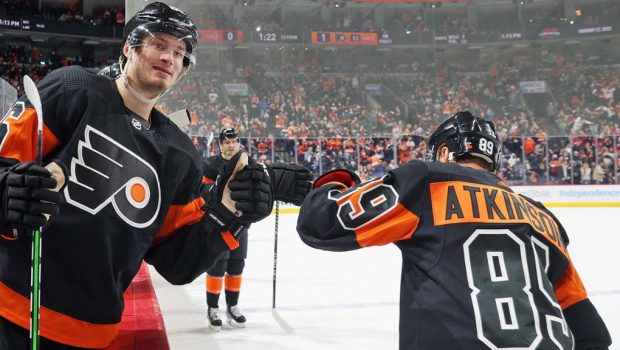 Cam Atkinson and Claude Giroux scored in the Flyers 2-1 victory over the visiting Washington Capitals.

Carter Hart made 27 saves for the Flyers, who snapped a six-game losing streak and won for just the third time in 22 games.

“Big getting the win, maybe that’ll help,” interim coach Mike Yeo said. “I feel like we’ve been building our game, and now we’ve got to make sure that the results follow it.”

Giroux tied Hall of Famer Eric Lindros for eighth place on the Flyers’ all-time scoring list with the 290th goal of his career just 11 seconds into the game to put Philadelphia up early. Atkinson outraced Martin Fehervary to the puck in the Philadelphia zone, then fed Giroux for a wrist shot from the slot that beat Ilya Samsonov on the blocker side for his 17th of the season.

The Flyers went up 2-0 with 1:22 left in the period when Atkinson got his team-leading 18th of the season off a Scott Laughton’s pass.

T.J. Oshie scored for the Capitals, who lost their second straight.