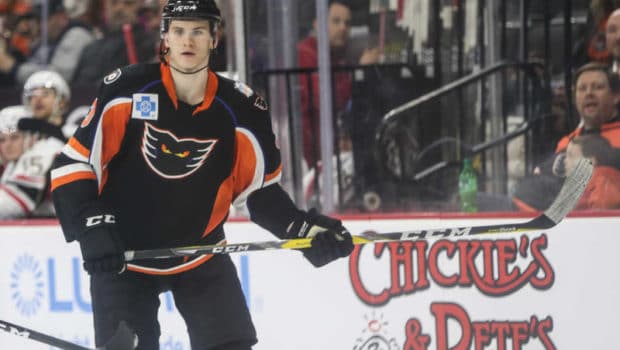 Samuel Morin’s hockey career may be over. is going to have to do it all over again.

The defenseman the Flyers selected in the first round of the 2013 draft tore the ACL in his right knee Wednesday night when playing for the Lehigh Valley Phantoms.

That’s twice in the same knee in 18 months.

“I saw Sam before (last night’s Flyers) game,” coach Alain Vigneault said. “There’s no doubt that we feel for him. There’s a kid that spent the whole summer here trying to get himself back to playing. He accepts to go to the minors to play some games and I guess on a nothing play, he heard his knee pop. Very unfortunately. Hopefully he’ll want to put himself through all that year-long rehab and give himself another chance to play.”

Morin, 24, tore it the first time in the first period of the Phantoms’ record five-overtime playoff game against the Charlotte Checkers in 2018. Rehab took up nearly all of last season. He was able to get in five NHL games and two AHL games.

He had a strong enough camp to make the Flyers’ roster this season but didn’t play very much. He sat out the first nine games as a healthy scratch, then played 12:32 of ice time in a 5-3 loss to the New York Islanders. The result was enough to put him back on the outside looking in and last week the Flyers asked him to go back to the Phantoms for a two-week conditioning stint. The injury came in his third game.

“You never want to see one of your good buddies get hurt,” said Phil Myers, who played with Morin in the minors at times in the past. “Going (through) what he’s been through, I’m here for him. I mean, you never want to see anybody get hurt. It really sucks.”

Morin is in the second of a three-year contract that pays him $700,000 annually. He signed it about a month after tearing the ACL a first time, knowing he’d have a tough road back to playing but at least he’d have contractual stability. Now he’s expected to be out all of this season and probably a lot of next season also.