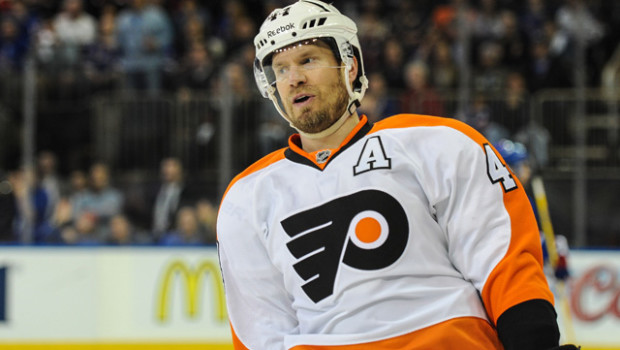 FLYERS' TIMONEN TREATED FOR BLOOD CLOTS, MAY NOT PLAY AGAIN

Flyers fans may have seen the last of Kimmo Timonen.

The team announced Tuesday that veteran defenseman Timonen has been diagnosed with blood clots in his lower-right leg and in both lungs and is being treated for this disorder in his native Finland. His return to play is yet to be determined.

Timonen re-signed with the Flyers after last season on a one-year, $3.5 million deal. The 39-year-old blueliner has been a key piece of Philadelphia’s defense for the last seven seasons.

It was believed that the 2014-15 season would likely be Timonen’s last in the NHL.

Former Pittsburgh Penguins goaltender Tomas Vokoun was treated for a blood clot in his pelvis just prior to last season, undergoing surgery to desolve the clot, and he ended up missing the entire year. Though he didn’t end up playing again and is still awaiting a new NHL contract this offseason, Vokoun said the procedure saved his life.

Though this will certainly seem to have implications on the Flyers’ plans for next season, the first and foremost concern is Timonen’s health. It sounds like a scary scenario playing out currently, but the good news is that he is already in the care of doctors.